With installed motion detectors at home, you expect an instant response to intruders. If a thief steps over the threshold or breaks in through the window, an alarm will be triggered. And you can rest assured that any high-quality alarm device can handle this task. But responding to motion is only half the battle: an important quality of a detector is the ability to determine what exactly is moving. It must quickly and accurately detect a person, while also ignoring the natural interference and pets, so that you and the security company are sure: if the security system has activated the alarm, the threat is real and you need to respond immediately.

This article tells how infrared motion detectors see the world, what technologies they use to distinguish a sheepdog from a villain, and what animal owners should remember when installing a security system at home.

Motion detectors based on infrared sensors pick up infrared radiation or, in other words, the heat. 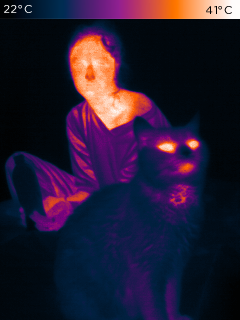 The closer to white, the more intense the radiation and the warmer the object.

Sometimes they say: “The motion detector saw a human”. However, these devices do not see objects, animals, or people; in fact, they only deal with data.

A special curved Fresnel lens focuses infrared radiation onto the detector’s pyrosensor. Then the sensor signals are sent to the microprocessor, which converts them to digital data. This is followed by threat analysis and assessment, which is precisely the key difference between smart detectors and their primitive counterparts. Knowing the intensity of infrared radiation and the dynamics of the source movement, software algorithms determine the nature of the threat, and the detector decides whether to raise an alarm or ignore it.

How pet immunity is implemented in Ajax motion detectors

When properly installed and configured, MotionProtect, MotionProtect Plus, CombiProtect, and MotionCam indoor motion detectors ignore animals that are up to 50 cm in height and weigh up to 20 kg. The maximum weight is defined as an understandable orienting point, but in reality, the size of the heat spot in the infrared spectrum is of importance. Keep in mind that detectors do not see objects but instead analyze the infrared radiation of these objects. 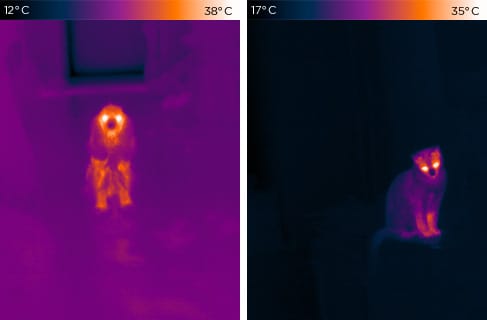 Motion detectors are less sensitive closer the ground. That’s where large pets are assumed to roam. 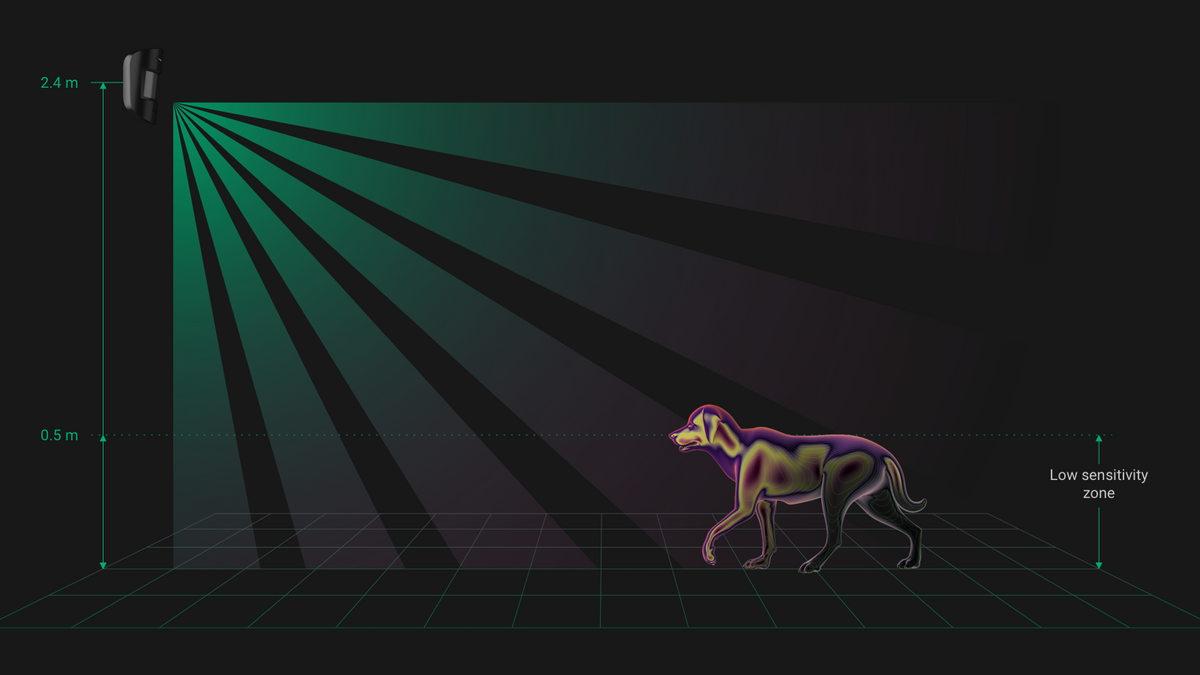 To assess the threat, motion detectors use the SmartDetect software algorithm developed by Ajax Systems. When motion is detected, SmartDetect analyzes the signal waveform of the infrared sensor and compares it with values ​​specific to human motion. Because of the heat spot of an animal is small and the signals enter the lower zone of the Fresnel lens (which transmits less radiation to the sensor), the detector does not raise an alarm.

MotionProtect Outdoor and MotionCam Outdoor detectors do not respond to animals with height up to 80 cm. To effectively ignore all outdoor-typical interference, these detectors are equipped with two infrared sensors and read signals from two areas of space. They raise an alarm only if both sensors detect motion. 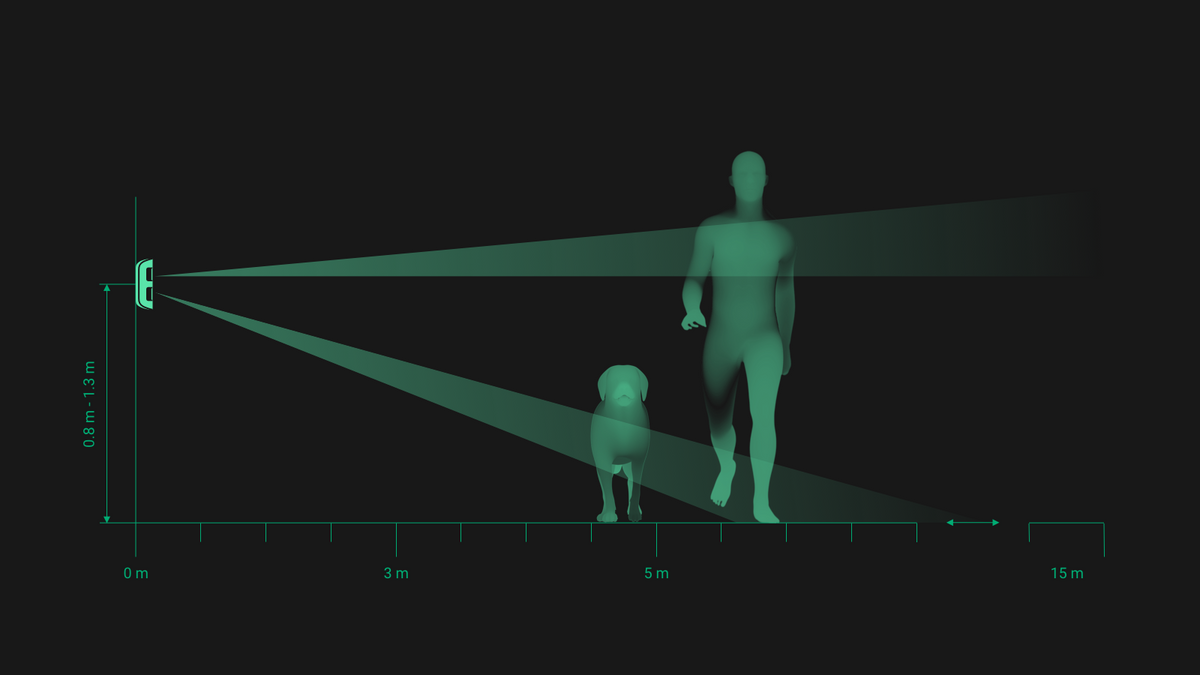 Like Ajax indoor detectors, outdoor detectors use the SmartDetect algorithm — the first software level of protection against false alarms. The algorithm analyses and compares data from each sensor. As a rule, the detector is ready to make a decision whether to ignore or raise an alarm at this stage. But if the situation is ambiguous, the spectrum analysis will be involved for frequency components of the signals of two sensors. This anti-false alarm protection system unique to security detectors was named LISA.

The DualCurtain Outdoor bidirectional outdoor curtain motion detector is equipped with two systems of two IR sensors. It has a narrow horizontal detection angle and uses a 3-step digital ELSA algorithm. When triggered, the detector sequentially compares the shapes, patterns, and time intervals of the sensor signals to filter out false alarms.

Points to consider for motion detectors to ignore animals

1. Make sure that the motion detector is installed at the optimum height.

If indoor motion detectors are installed lower than the recommended height, animals move in the hypersensitive area. If a sheepdog walks on its hind legs or even a small spaniel frolics in the chair, the detector may raise an alarm. 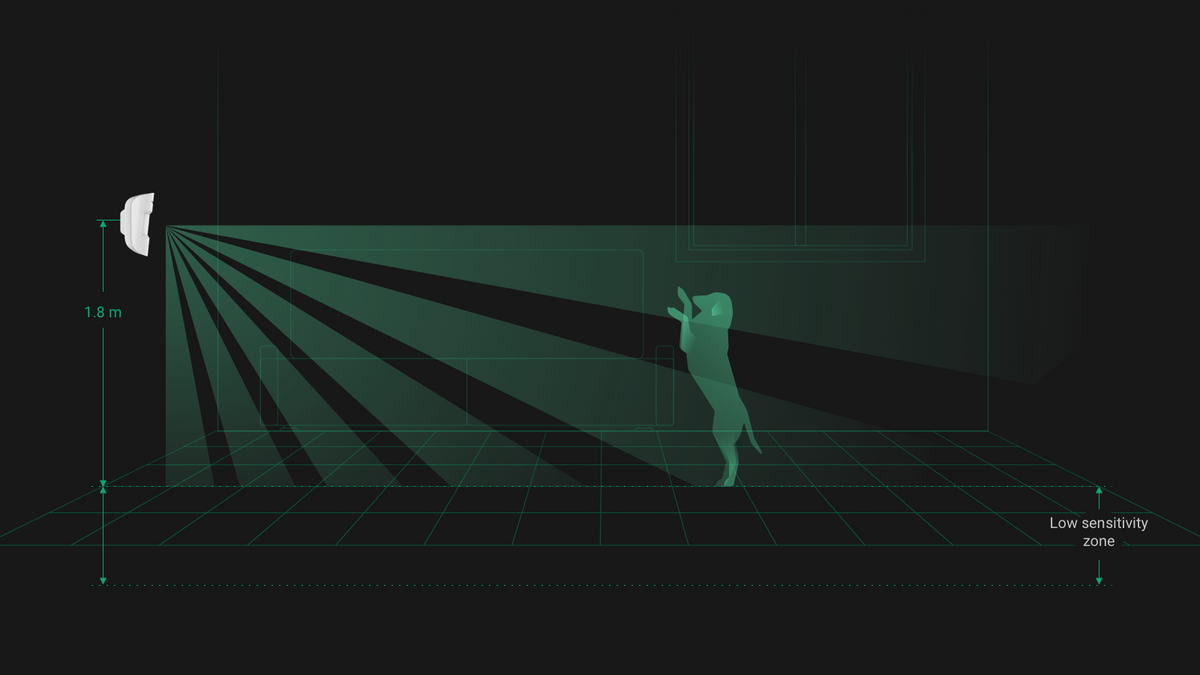 Outdoors, the terrain of the protected area must be taken into account. If a large dog enters the detection area of both outdoor detector lenses, pet immunity function may not be able to handle it and the system will raise an alarm. 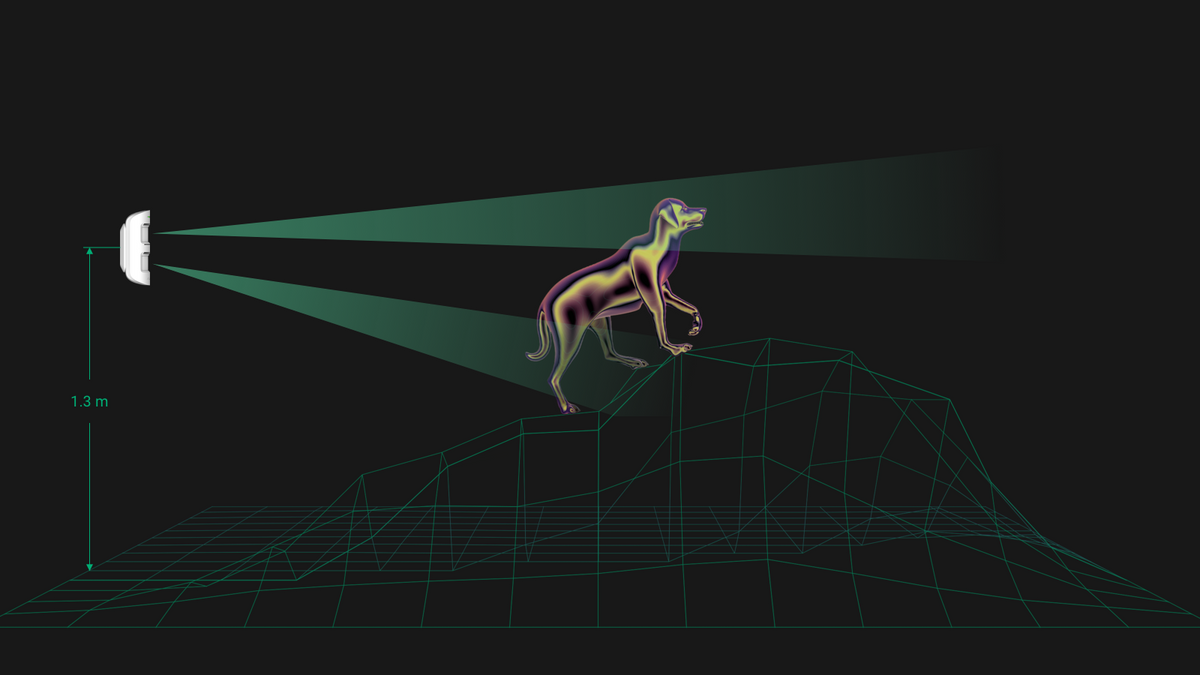 2. Set the detector to appropriate sensitivity.

When protecting rooms to which animals have access, MotionProtect, MotionProtect Plus, and CombiProtect detectors are set to medium or low sensitivity, depending on the size of the animal.

3. Make sure that the animal cannot approach the lens of the room detector.

The closer the moving object gets to the lens, the bigger its thermal spot becomes. If an agile dog jumps to the detector level in close proximity to the lens, an alarm will be triggered. The same goes for a cat that jumped on the closet to get close to the detector. 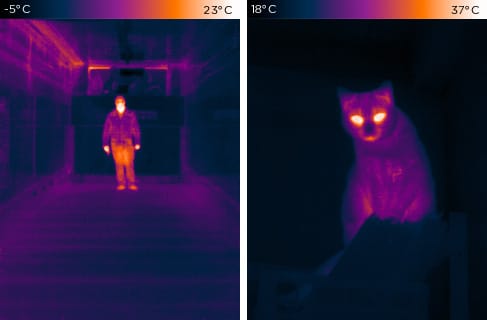 Note that activating the Near Area Detection function of DualCurtain Outdoor significantly reduces the effectiveness of pet immunity. Use this feature to protect windows and other passages that are not accessible to pets.

To eliminate the slightest chance of worries and unnecessary patrol dispatches due to triggering on animals, use the new MotionCam or MotionCam Outdoor motion detectors with visual alarm verification. When motion is detected, they take a shot or a series of 2-5 shots. Both you and the security company know exactly what caused the alarm: a playful pet or a robber breaking into your house.