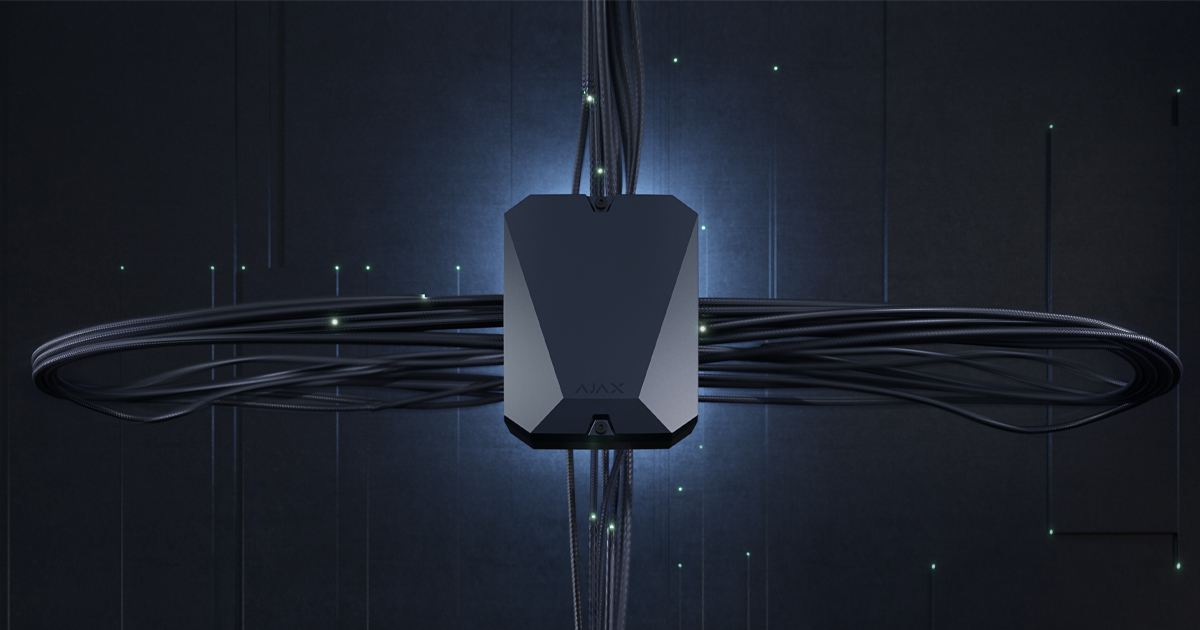 Security technologies are evolving every day. Not that long ago, alarm systems were installed to timely inform security companies about an intrusion, and now, they are the key parts of entire systems that combine automatic protection from different types of threats, video surveillance, and smart home capabilities.

This technological jump has divided the industry into two camps. On the one side, there are old alarm systems that perform their functions properly, although they do not offer modernization possibilities. On the other, there are smart home systems that offer many smart features but are not always ready to provide reliable security.

While developing Ajax, we were inspired by this confrontation and combined security standards with a user-friendly experience. However, Ajax is a distinct ecosystem of devices, to which you need to switch completely. The system uses its radio protocol and is controlled via the app. In the early days of its development, Ajax did not support third-party detectors.

In 2017, we partially narrowed the gap between technologies by releasing the Transmitter, a module for integrating third-party wired devices into the Ajax system. With it, any wired detector with NC/NO contacts becomes part of our wireless security system. The module receives a signal from a detector through a wire and transmits it to a hub via the Jeweller radio protocol. Managing the security modes of a third-party detector and the Ajax system is done in a mobile app. 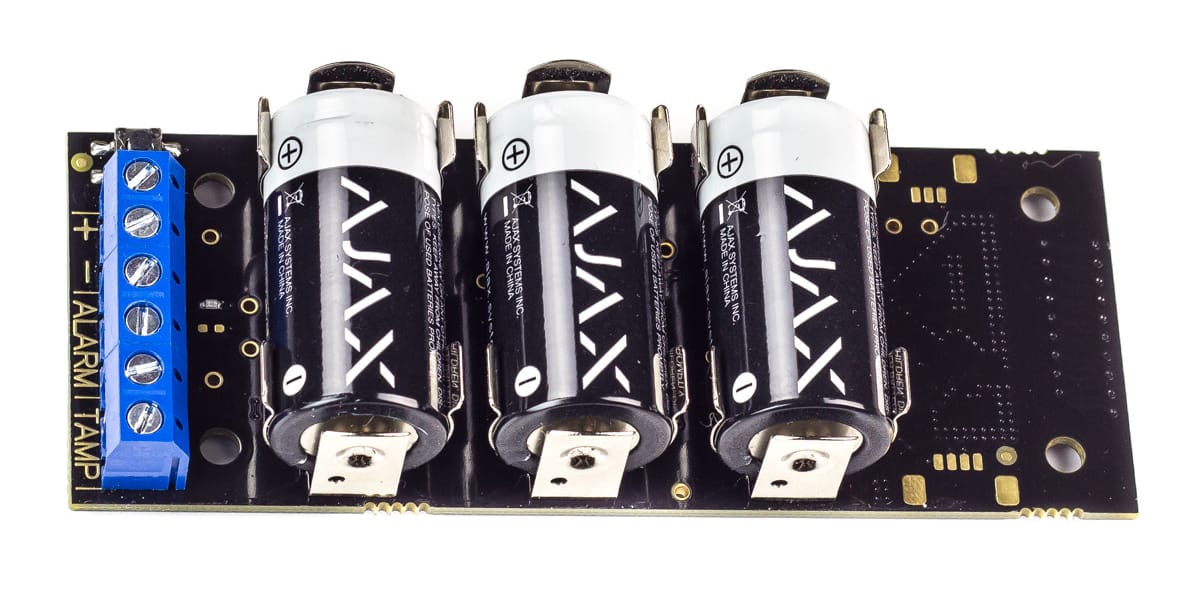 We designed the Transmitter to expand the Ajax arsenal with devices that solve specific problems: household gas detectors, liquid level detectors, thermostats, IR barriers. But the market had its view on the novelty. Professionals appreciated the possibility of remote configuration and control and began using the Transmitter to renovate entire wired security systems.

We received photos of configurations that were completely unexpected for us where 5, 10, 20 Transmitters were used simultaneously. Despite the cost of such a solution, users took this step to get smart features for old alarms. Nevertheless, some people used the Transmitter to extend Ajax security to underground garages, storages, and safes, where radio waves could not penetrate. 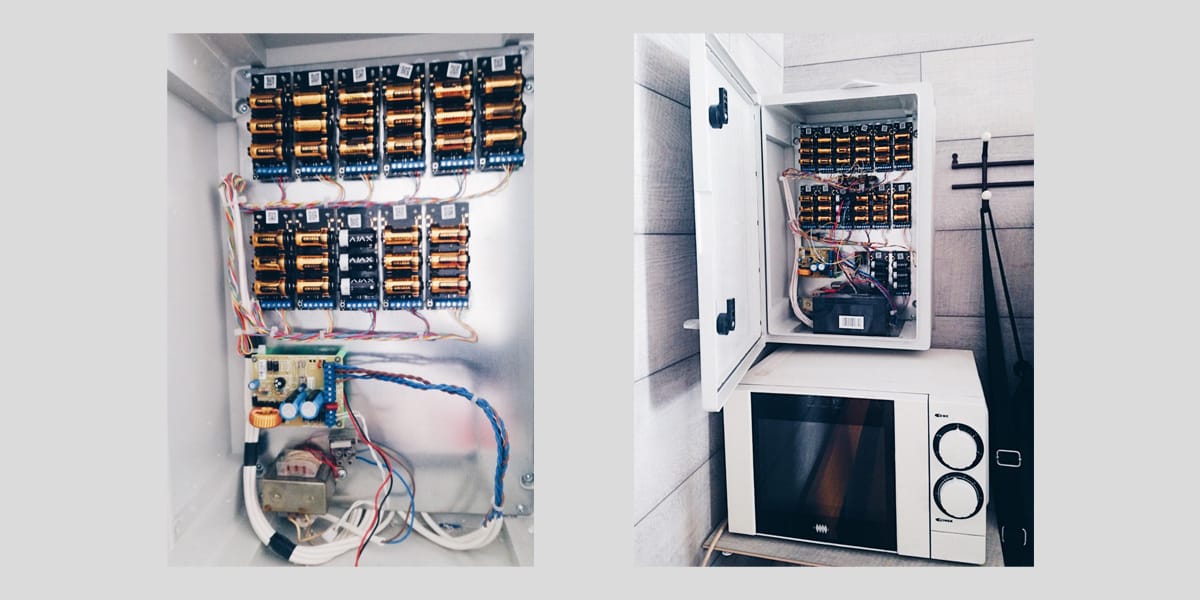 We have thoroughly examined the experience of the Transmitter use and present you with MultiTransmitter — an integration module with 18 wired zones. The module takes the place of the old security control panel and connects wired devices to a wireless control panel — a hub (all models are supported). This provides users with more available settings, automation scenarios, and control from their smartphones. 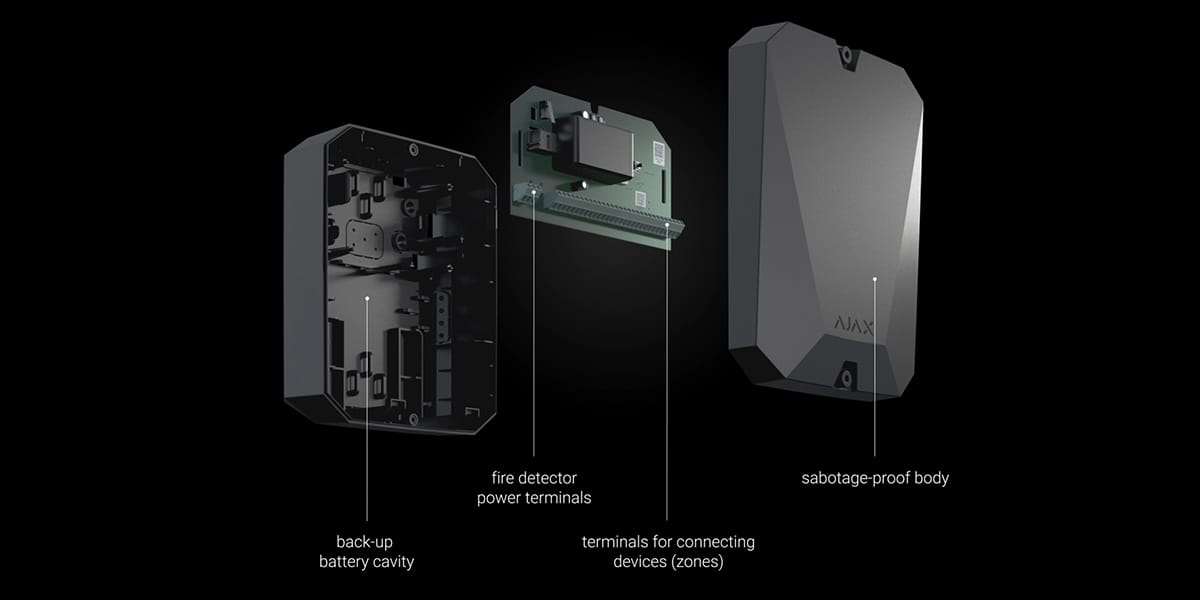 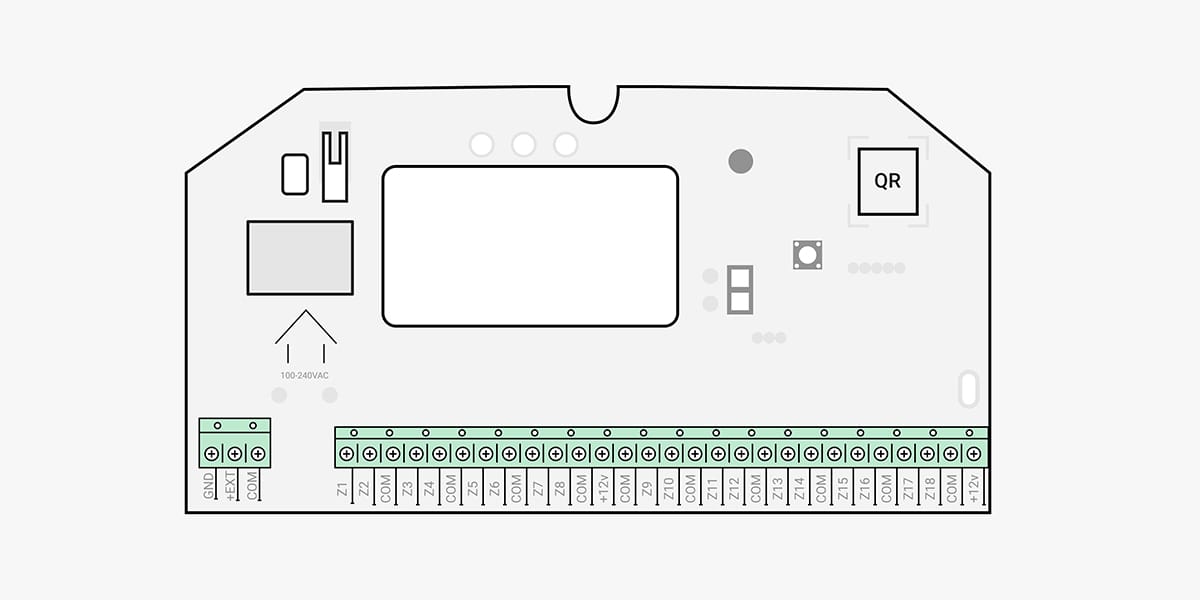 The MultiTransmitter itself is powered by the 110/230V main, and, in case of a power loss, there is a place for a backup battery in the body that will supply the module and the connected devices. The central unit and the users are notified about any power problems in the Ajax app.

Also, in the app, it is possible to define a room, a group, a device type (detector/tamper), and an alarm type for each device. Due to this, users can see a clear notification text indicating what happened, when, and where instead of the zone number of the triggered detector. And the security company receives a clear alarm code and responds according to the protocol. You can choose one of five alarm types:

The module is equipped with two tamper buttons, which respond to opening the lid and detaching the body from a wall — it will not be possible to open the MultiTransmitter without your awareness. And the adjustment of the resistor resistance in the app allows the module to instantly notice faults, power failure, or signal cable interruption of the connected detector.

The MultiTransmitter allows you to switch from a simple wired alarm system to Ajax in a step-by-step process. In the beginning, a hub and an integration module are enough. With them, users get security management in the app, event log, and extensive upgrade options. Wireless leakage, smoke and glass break detectors, street and home sirens, smart plugs, and relays — all these devices can be added to the system at the moment of renovation or later.

In the Ajax system, users can specify how to receive alarms and system events notifications: via push notifications, SMS, or calls. MotionCam motion detectors allow you to know in seconds whether an intrusion has actually occurred or someone has forgotten to disarm the security.

For engineers of security companies, the MultiTransmitter is a step towards remote service. In the Ajax PRO: Tool for Engineers mobile app or the Ajax PRO Desktop PC app, you can remotely set the delay when entering/leaving, adjust a schedule for switching on the night mode and activation of a siren when the detectors are triggered, and temporarily switch off the device in case of a malfunction. Thanks to separate power terminals, false alarms of fire detectors connected to the MultiTransmitter can be reset in the app. No more unnecessary site visits.

Paired with the hub, the MultiTransmitter takes the stability of the system communication with the monitoring station to a new level. Ajax hubs support up to 4 communication channels, which can include Ethernet, Wi-Fi, and mobile service (2G/3G/4G). If the hub can’t connect to any of the channels, the security company and users will know about this in a minute. The times when such a situation became known hours later are in the past.

Another essential function that the MultiTransmitter opens for outdated wired alarm systems is the automation scenarios. They allow the system to not only report a threat but also actively resist it. This will require smart plugs and relays, which will switch on the light, close the shutters, electric locks, and de-energize the room by an alarm of one or more detectors.

We have made sure that the MultiTransmitter installation and configuration process does not require extra time and effort. Like other Ajax devices, the module is connected to the hub in the app by scanning a QR code. When connecting wired devices, the MultiTransmitter indicates resistors resistances and offers them as recommended. And if the device was connected incorrectly, the system will inform you about this.

By connecting a wired alarm system to the hub via MultiTransmitter, you pass on the worries of further upgrades to Ajax. Hub software updates are done by air, adding new features and support for new devices. The coverage area of the security system can be easily expanded with radio signal range extenders, and thanks to the data import function, you can update the hub to a new model and transfer the entire system configuration to it in less than 15 minutes.

Price and where to buy