The first line of defence for home and business

A street is always in action: the wind sways leaves and bushes warmed by the sun, animals and birds move around, various insects land on the body of the detector. This diversity of flora and fauna creates a constant barrage of noise that makes it hard for outdoor motion detectors to spot the real threat, humans. We’ve solved this problem both on software and hardware levels by implementing two PIR sensors and developing a unique two-step algorithm for signal analysis, LISA.
The story behind MotionProtect Outdoor invention

Whenever MotionProtect Outdoor detects motion, LISA analyses and compares signal forms from two sensors in real-time. If forms are similar, the alarm is raised. 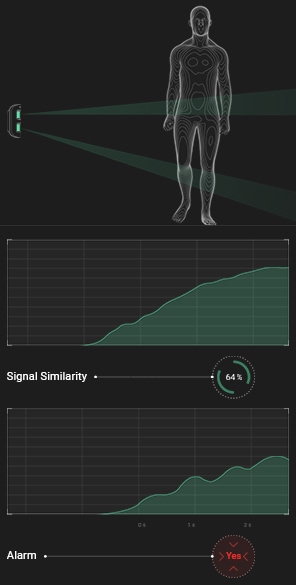 When both sensors detect motion, but the correlational analysis doesn’t identify enough similarities, LISA compares frequency components in the signals of both sensors.

An outdoor detector is an easy target. During the day when the system is disarmed, intruders may damage the sensors or block their view to gain an advantage in trespassing at night. To prevent the cases of sabotage, we’ve equipped MotionProtect Outdoor with a tamper button and an advanced anti-masking system that can remain active 24/7.

The anti-masking system in MotionProtect Outdoor calibrates automatically by analyzing the surrounding area when mounting the device onto SmartBracket. Then, if an obstacle appears in the field of view of anti-masking sensors or if they are painted, the detector quickly notices sabotage and raises the alarm. Moreover, a sensitive tamper is immediately activated if someone attempts to dismount the detector from SmartBracket.

We have developed the Jeweller radio protocol to ensure the uninterrupted operation of all devices within the security system. The Jeweller provides two-way communication between the hub and MotionProtect Outdoor at a distance of up to 1,700 meters and delivers alarms in less than 0.15 seconds. The radio protocol uses time frames to synchronize communication of connected devices, authentication to eliminate forgery, and encryption to protect against data leaks. Moreover, Jeweller is energy efficient and allows detectors to operate for years from pre-installed batteries.
Learn more

Ready for heat and cold

Ajax security systems protect users in all climate zones, from South Africa to Greenland. Heat or cold, snow or rain—MotionProtect Outdoor is ready to operate in any weather. The outdoor detector works up to 5 years from pre-installed batteries. Moreover, to increase autonomy and simplify maintenance in extreme conditions, we have provisioned the option of using external power.

To connect MotionProtect Outdoor to the hub, simply scan the QR code with your smartphone’s camera. Thanks to SmartBracket mounting plate, the device can be installed without disassembling the body. Use the Ajax app to test and configure the detector.

At the same time, the installation of outdoor detectors is a professional task. It requires landscape assessment, understanding of potential break-in points, and prediction of possible problems with interference. To ensure that MotionProtect Outdoor works efficiently and to avoid false alarms, please contact a qualified engineer.
Manual
The device is added to the security system using a QR code
The device is mounted using SmartBracket without disassembling the body

A qualified engineer guarantees high-quality installation of your security system and the realization of its full potential. Contact one of the Ajax Certified Partners in your region for assistance.
Our partners

Hood for protecting masking sensors from rain and snow

A complete security system should be equipped with devices that signal danger. Intrusion into a protected area is one of its most common types, and break-in and its consequences can be prevented using motion sensors.

How to choose a outdoor motion sensor

To install a motion sensor, the first step is determining the type of device and its purpose. Motion detectors are used to protect a room or territory, control lighting, and smart homes.

Common types of motion sensors: microwave, infrared, ultrasonic and combined. More details about each of them:

The principle of operation of such a detector is the radiation of high-frequency electromagnetic waves by the device and triggering when the signal frequency changes.

Microwave motion sensors detect objects in motion even behind obstacles – glass, doors, plasterboard walls. Most microwave motion detectors have several independent detection zones and are small. The device’s performance does not depend on temperature and weather conditions, and high accuracy helps capture even slow movement.

IR presence detectors are triggered when infrared radiation is detected at a temperature close to the temperature of the human body. A feature of this type of sensor is setting the scanning angle and detection range independently. And if the manufacturer of the infrared sensor does not provide immunity to animals, there is a risk of false alarms.

Ultrasonic presence sensors emit sound waves with a 20,000 to 60,000 Hz frequency. A sound that bounces off an object in motion changes the signal’s frequency. The motion sensor captures these changes and is activated.

Ultrasonic sensors detect an object in motion, regardless of its temperature and material; the operation of the device is not affected by air dust or humidity. The disadvantages of this sensor are short-range, and the device fixes only objects that move quickly. The motion sensor will most likely not work if the movement is smooth.

Types of motion sensors by the location

An outdoor motion sensor allows users to adjust the direction in which the space will be controlled or has a coverage area of 360 degrees. The device is easy to install and can be either wired or wireless. It is essential to choose a motion sensor with protection against dismantling and immunity to animals and extraneous movements. It is worth paying attention to protecting the case from weather conditions – rain and snow.

Installing an external motion sensor is advisable on the property’s facade or the fence.

Room motion sensors are installed in walls, furniture and on the ceiling. When installing wired sensors, users need to lay them in the interior at the design stage, for laying wires. The wireless motion sensor is mounted in a ready-made interior. As with outdoor motion sensors, it is important to pay attention to immunity to animals and extraneous movements to prevent false alarms.

Types of motion sensors by the connection method

Batteries or accumulators power autonomous presence sensors, and the signal is transmitted via radio. The user does not need to lay electrical wiring and wires; the user can mount it in a ready-made interior.

Wireless outdoor motion detectors are often equipped with solar panels that charge the battery during the day.

Wired motion detectors require power wiring. The main disadvantage of such a device is the termination of work in the event of a power outage in a protected area.

Characteristics of movement detectors that users should pay attention to

When choosing a device, users need to consider how large the control area will be, the viewing angle, the range of the sensor (5-50 meters), and also the angle of inclination to avoid “blind” zones.

Protection against dust and moisture

To avoid false alarms and interruption of the motion sensor, users need to choose a model with protection against dust and splashes.

If an animal enters the sensor’s field of view, the sensor ignores it. The presence of immunity to animals prevents false alarms of the motion sensor.

MotionProtect Outdoor is an outdoor wireless presence detector that warns of intrusion into a protected area. The complete set will include:

The principle of operation of the motion detector Ajax MotionProtect Outdoor

The Ajax MotionProtect Outdoor motion sensor detects movement in a protected area by reading infrared radiation from an object. All living beings are sources of infrared radiation, including humans. The sensor receives information using two independent infrared sensors, which transmit data to the central alarm panel via the Jeweller secure radio protocol.

The two-factor LISA algorithm checks the signals read by the sensors. The algorithm analyzes the received data from two sensors and compares them. If the signals are similar, the user receives a notification about the incident. This principle of operation helps avoid false alarms of the wireless motion sensor.

The range of the external presence detector is adjusted by the user independently in the range from 3 to 15 meters.

The Jeweller radio protocol ensures the interaction of all security system devices without interruptions. The protocol supports two-way communication of the MotionProtect Outdoor wireless outdoor motion sensor with a smart control panel at a distance of up to 1700 meters. Hub receives alarms in less than 0.15 seconds. Jeweller uses communication encryption to protect data and authentication to prevent device forgery. The radio protocol is energy efficient – MotionProtect Outdoor detectors work up to 5 years without replacing the pre-installed batteries.

Animals, birds or trees can cause a false alarm with their movement. But the MotionProtect Outdoor motion sensor eliminates this kind of triggering, using a system for scanning information with two IR sensors and a two-stage LISA analysis algorithm.

The MotionProtect Outdoor motion sensor is equipped with a tamper and an anti-masking system to prevent intruders from damaging the sensor or blocking the view imperceptibly. The tamper will activate an alarm when an attempt is made to remove the wireless motion detector from the SmartBracket mount. The anti-masking system detects sabotage and raises the alarm if the sensor is painted over or the view is obstructed.

MotionProtect Outdoor is adapted to any weather, thanks to protection from dust and moisture. The outdoor wireless sensor works for up to 5 years on pre-installed batteries. The operating temperature range of the external sensor is from -25°C to +60°C, the permissible humidity for correct operation is up to 95%.

To connect the MotionProtect Outdoor motion detector to the hub, users need to scan the QR code in the Ajax app and assign a name to the wireless motion detector. All tests and settings are made in the mobile application.

A wireless motion sensor installation occurs without disassembling the case on the SmartBracket mounting panel.

When installing a wireless outdoor motion sensor, users need to consider possible interference and ways to avoid the sensor’s reaction to them, landscape features and understand the likely paths of intruder penetration.