Ajax Systems in cooperation with Elotec, a Norwegian distributor of security systems and manufacturer of wired fire alarms, won a tender from the municipality of Bergen in Norway for the supply of a wireless fire security system.

The project aims to protect the wooden architecture of the city, which is a UNESCO World Heritage site. Wireless Ajax detectors will provide an opportunity to protect the city center without disturbing the interior of the buildings.

We are lucky that our distributor in Norway, Elotec, has an in-depth expertise in fire security. Being also a manufacturer of wired fire alarm systems with almost 30 years of experience, they chose Ajax as their partner to protect the important historical site. This further proves that wireless fire solutions are becoming a trend in the industry.Valentine Hrytsenko, Ajax Systems CMO

This project is a big win, and securing UNESCO World Heritage buildings is our responsibility. The development we have done with Ajax to make this solution was crucial, and making the system perfect for these kinds of projects.Kristian Kleven, product and quality manager in Elotec

The Goal of the Project

Bergen has been affected by multiple fires over centuries, but the city is still one of Europe’s largest historical centers with wooden architecture. The city has 12 districts with old wooden buildings located close to each other, and about 11,000 residents.

The project is funded by the Norwegian Directorate for Cultural Heritage. The implementation is supervised by Elotec in cooperation with the Bergen Fire Department.

Every resident or business owner in the protected area of Bergen had an opportunity to apply for the installation of a fire alarm system and to connect to the fire monitoring station free of charge. 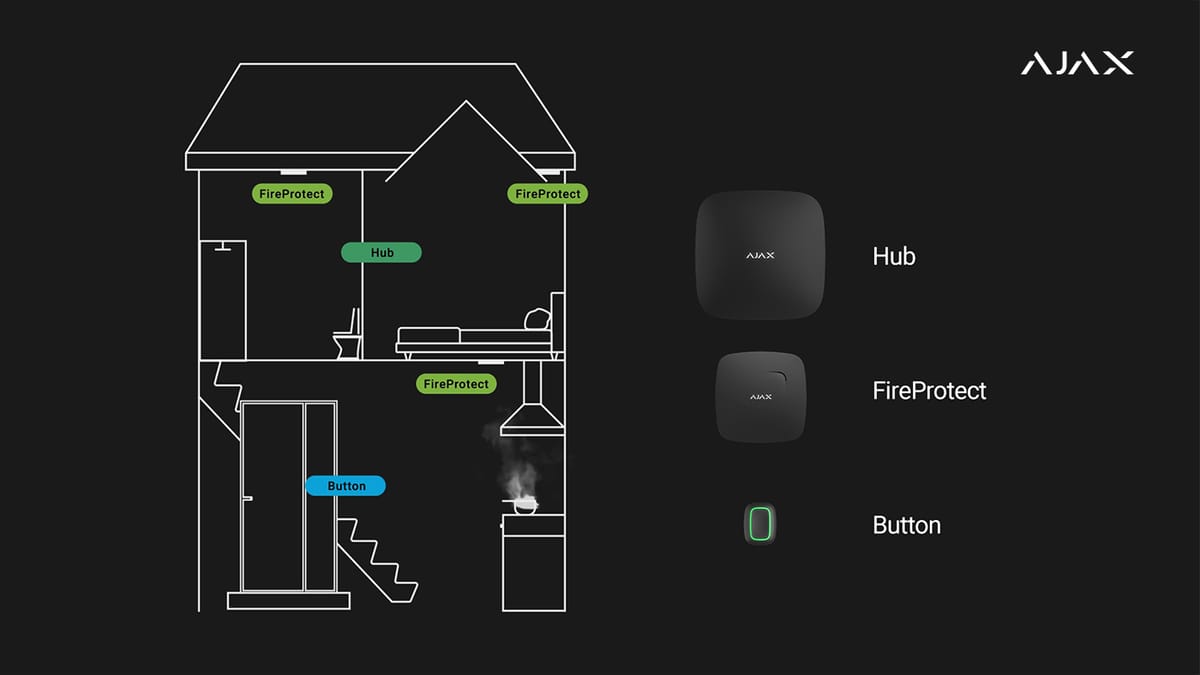 Ajax fire detectors have a synchronous alarm function (interconnect) — when one detector is triggered, all fire detectors within the system are activated. Following Elotec’s initiative, for the Bergen project, the Ajax R&D team needed to implement a delay in interconnect distribution and transmitting alarms to the fire monitoring station in order to minimize false calls of fire brigades.

Hub control panels, FireProtect fire detectors, and Button panic buttons (with the new alarm interconnect delay function) for every house. If the owner of the premises simply overcooks a meal on the stove, they can press the Button within 2 minutes from the moment when smoke was detected, thus postponing alarm transmission. In this way, they will have another 5 minutes to air the premises out and prevent the alarm from spreading to other detectors, and also to prevent false calls to the fire brigade.

However, if the button is not pressed within 2 minutes, the alarm will be directly transmitted to the fire department.

All Ajax fire detectors support the Delay of Interconnected Alarms function. However, FireProtect and FireProtect Plus detectors must also have firmware 3.42 or higher. The feature became available to all users after the OS Malevich 2.10 update.