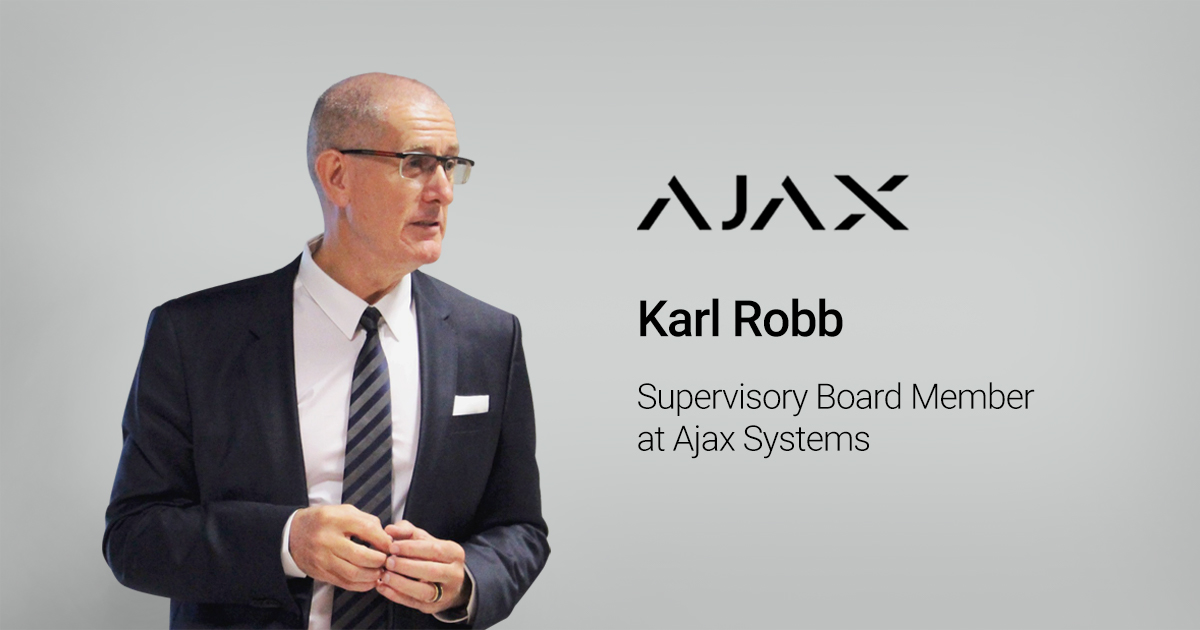 Ajax Systems is delighted to announce that Karl Robb joined Ajax’s Board, as an Independent Board Member. Karl’s 9 years of public board service, as well as his NYSE IPO experience, will assist Ajax Systems to greatly enhance corporate governance and compliance on the way towards its IPO. Additionally, Karl’s senior executive credentials within the global technology sector, will provide a strong sounding board and offer guidance for Ajax’s leadership team, as Ajax continues its rapid growth and tackles the challenges of scalability, globalization and compliance.

Karl Robb is a global technology veteran, combining 39 years of successful leadership in software engineering, hardware production and global distribution. Karl spent 15 years in Western Europe, 9 in the US and 15 in Eastern Europe, while operating businesses in over 30 countries. Most recently and notably, since 2004, Karl has served on the Board of Directors at EPAM Systems, shepherding it from $30 million revenue to over $2 billion, through a very successful NYSE IPO onto a $19 billion market in just 9 years. Prior to joining EPAM, Karl was the CEO and co-founder of Fathom Technology, which merged with EPAM in 2004. Further back, Karl held executive positions within global IT companies such as Softtek, Mobile Computing Systems, Tandy-Victor Distribution AB and ICL-Fujitsu.

It’s a great honor and a privilege to join such an amazing, innovative company with industry-leading hardware and software platforms that define new standards in key areas; Function, Appearance and Security. Add to that, world-class branding and design aesthetics, fronted by one of the best looking and most usable digital marketing platforms I have ever seen. It’s easy to understand why Ajax’s revenue, market share and profits grow exponentially. I started following Ajax Systems in 2016 when I purchased their security system for my home in Kyiv. Subsequently, I installed the system in my property abroad as well as in EPAM offices.

Ajax Systems is the most exciting and successful product company based fully in Eastern Europe. I look forward to playing a role in this amazing story as we transition from small disruptive super-cool technology leader to a globally dominant, scalable, market-leader through a successful listing on one of the major stock exchanges. Karl Robb, Supervisory Board Member at Ajax Systems

Karl has invaluable expertise in global business development. He built international EPAM sales teams, participated in the large-scale engineering hiring process and was specifically part of EPAM’s team that prepared for, and executed, a very successful New York Stock Exchange IPO. His experience is extremely valuable for Ajax Systems, and we expect to achieve brilliant results together. Aleksandr Konotopskyi, CEO of Ajax Systems

Ajax Systems is a Ukrainian-based manufacturer of professional security systems with smart home capabilities. The company was founded in 2011 by Aleksandr Konotopskyi. In 2015, Ajax Systems launched production in Kyiv, raised the first $1 million from the SMRK fund, and then $10 million from the Horizon Capital in 2018. In November 2020 the company opened another plant in Kyiv, which will employ over 1,000 people.

This is the fifth year in a row, Ajax Systems demonstrates a steep increase in the number of employees and the number of users worldwide. Today, Ajax reliably protects more than 830,000 users in 120 countries and is recognized as the most award-winning wireless security system in Europe.