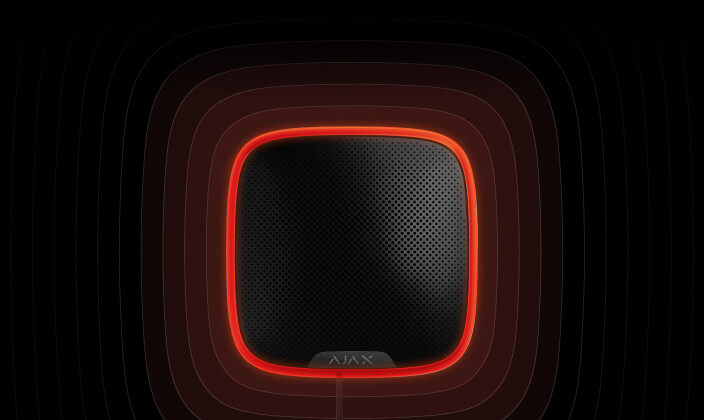 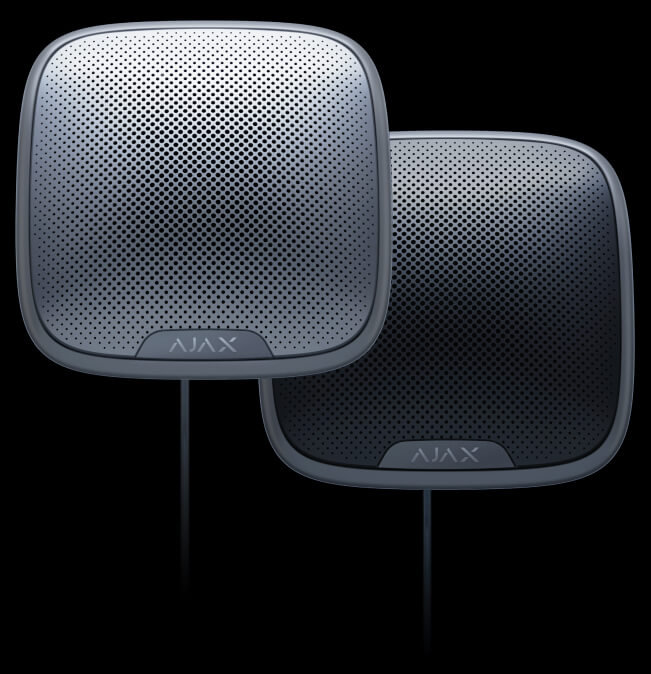 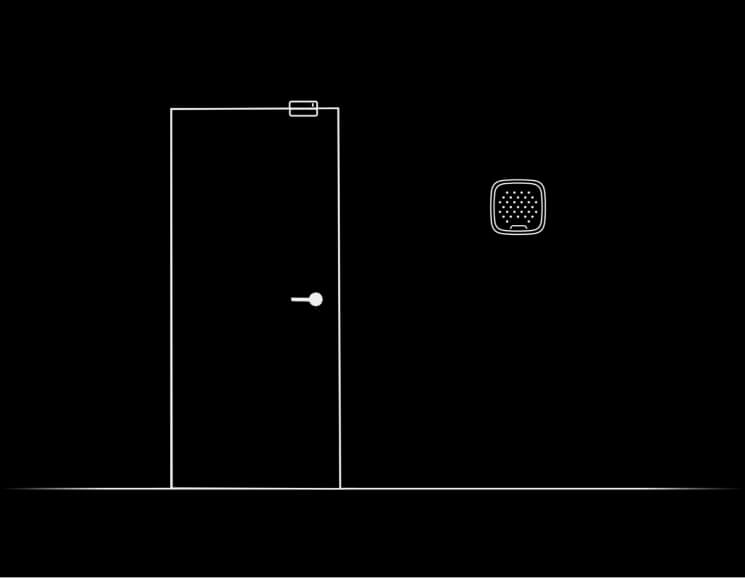 Office
StreetSiren Fibra in Back Door is offline. Connection via Fibra channel lost.

Office
Lid is open, StreetSiren Fibra in Back Door 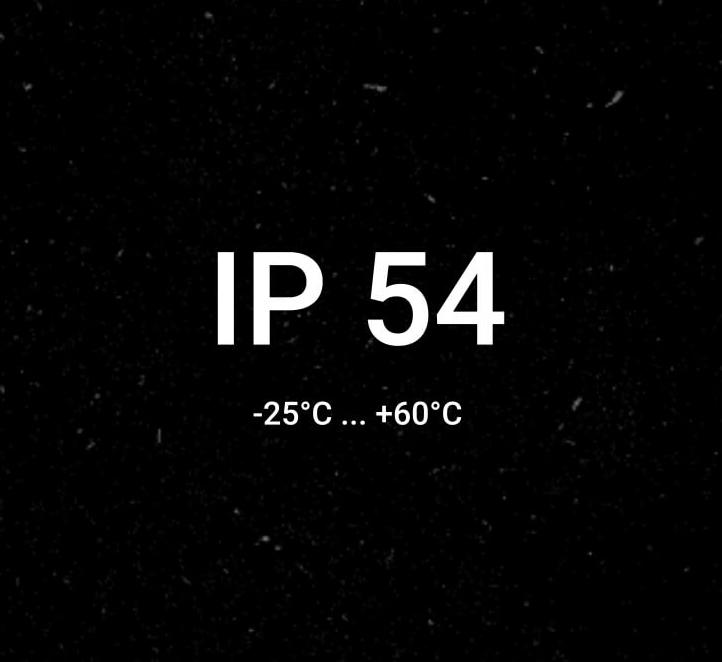 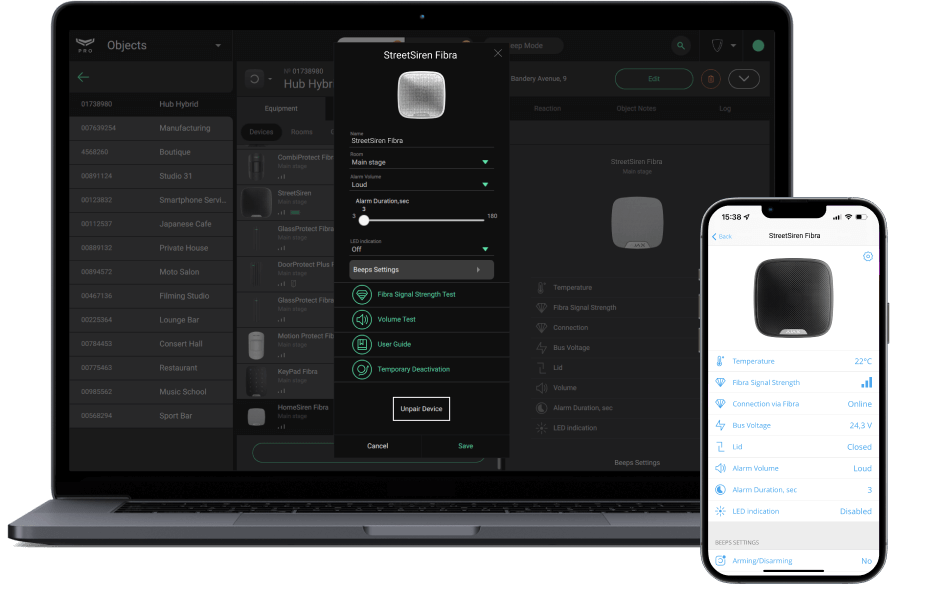 Siren in the security system

Security sirens are the first line of defense against intruders and their consequences. After triggering, the device’s speakers turn on a pre-programmed sound or backlight, which draws the attention of others to the guarded object and scare off intruders.

Modern security sirens have a high frequency sound, with which the alarm signal can be heard several blocks from the place of operation. Some models of security sirens allows selecting melodies with different sound frequencies, which attracts attention even more.

Differences between sirens for signaling

Attracting the attention of the environment with a light and sound signal is the best option for shops, offices, housing. With the help of sound and light, you can determine exactly where intruders are trying to penetrate. But for example, in large shopping centers and business centers, light is not so necessary, because the sound is enough to understand where the alarm comes from.

The siren can be powered in two ways: from the mains or from the battery. The network makes the siren dependent on rolling blackouts and the batteries need to be recharged or replaced. Only an installation engineer or a security company consultant can determine the right siren model for a particular type of room.

For additional protection, burglar alarms transmit a signal not only to a siren for alarm notification, but also to remote security or to the property owner’s mobile phone.

How to choose a burglar siren for your security system

The first thing you need to pay attention to when choosing a siren for an alarm is its power (dB). There are sirens with different sound levels. So to protect the building inside, it is worth picking up sirens with a minimum amount of dB.

If the room is far from people, you need to take into account the distance and choose a siren with a large number of dB.

StreetSiren Fibra is a wired Ajax security siren that can be installed outdoors and indoors. The siren is equipped with an LED frame and a piezoelectric detector, which is capable of producing a sound with a volume of up to 113 dB.

The wired siren for the StreetSiren Fibra alarm system works as part of the Ajax security system. The device communicates with the security system control panel via a secure wired Fibra protocol, the communication range of which is up to 2 kilometers when connected via a U/UTP cat.5 twisted pair cable.

The principle of operation of the wired street siren StreetSiren Fibra

StreetSiren Fibra is a wired siren for outdoor installation. The device is equipped with a piezoelectric buzzer for audible notification and an LED frame for visual notification.

The wired siren for the StreetSiren Fibra alarm system is responsible for:

Features of a wired siren for street installation StreetSiren Fibra

Outdoor wired siren StreetSiren Fibra has a number of the following features:

To transmit messages, the outdoor siren uses Fibra technology, a two-way wired data transfer protocol. Fibra provides reliable and fast communication between the security control panel and other devices. Fibra instantly delivers alarms and events, even if 100 devices are connected to the system.

The Fibra protocol encrypts messages and verifies each communication session with devices. Thus, sabotage and replacement of the siren by an intruder is prevented. The protocol provides for regular polling of sirens and other system devices by the central (hub) at a specified frequency in order to control communication and display device statuses in Ajax applications in real time.

In Ajax applications, you can adjust the volume and duration of the alarm, as well as determine which sensors will turn on the siren. During an alarm, the siren sounds from 3 to 180 seconds, with a sound volume of 85 to 113 dB.

There is a tamper button on the body of the StreetSiren Fibra wired siren, which activates the alarm mode if an intruder tries to remove the siren from the mount, open or open the case. Also, a wired siren raises an alarm when the main power is lost.

Installing a wired siren to a StreetSiren Fibra alarm

The street siren StreetSiren Fibra is a device of the Fibra line of wired devices. Only accredited Ajax partners can install, sell and administer these devices.

In order for the security system and the siren itself to work correctly, it is important to properly prepare the project and install all devices. Violation of installation rules and recommendations can lead to system failures, false alarms or loss of communication with devices.

Experienced installation engineers know how to properly install security devices, taking into account all requirements. For example, you need to consider the Fibra signal strength, the audibility of the horn, the visibility of the sirens LED indication, and the fact that the wired outdoor siren is installed at a height of at least two meters in order to complicate the access of intruders to the device.

Outdoor wired siren StreetSiren Fibra works in hot, cold and temperature fluctuations. The siren is protected from water, snow and dust. The device can be installed on the facade of a building without a canopy. The housing is certified to IP54 protection class.