They are called nerds or geeks, or techies. But first of all they are interesting people, who are devoted to protecting your property and life. For our first interview with a PRO we met the head of a Kyiv-based installation company called Exlibris-V Oleksii Vorobchenko. We talked about equations, the National Technical University of Ukraine (KPI), and, of course, security systems.

«It Is a Family Business»

Nobody dreams to install security systems when they are a child. How did you become an installer?

It is a family business. We moved to Kyiv from Moscow in 1995 or 1996. At the time, the pressure on business in Moscow was very high. As soon as a company succeeded, it needed to find protection either among the mafia, or among the corrupt police. My father graduated from the Kyiv Military School of Communication, so he decided to put his knowledge of radio-frequency engineering to good use and started a business in security systems. 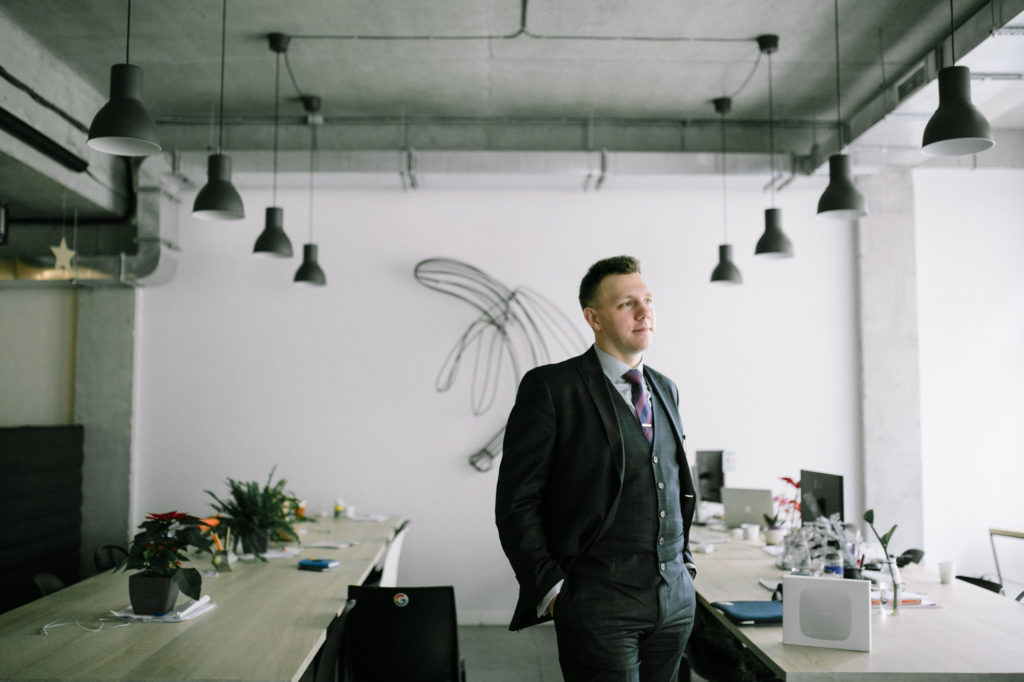 His returns were growing. When I was 13, my father said: «Dear, don’t you think it is time for you to earn money and not to ask for it?» At the time, in addition to school I had swimming and art classes on the weekdays and only had weekends free. So I started working part-time on Saturdays and Sundays and during school break.
My first workplace was my grandfather’s shop. I remember it vividly. In two weeks, I laid three kilometers of cable, received my money and felt happy. My father wanted to give me a hands-on experience of manual labor, so that I realized why it is better to do brainwork.

When I was 19, we had a huge falling out. I moved out and spent 9 months working in a different sphere, until I calmed down and proved myself that I controlled my own life. Luckily, my father started a second business in a couple years. By that time, I already did installations myself and supervised rough work on installation of detectors, managed finances, customized systems, had experience of procurement and warehouses. This experience allowed me to head the company.

You studied different majors at KPI. Which ones exactly?

I wasn’t a great student at school, so I started at Physics&Mathematics department, where they had 10 places for every 7 high school graduates applying to study there. By my second year, I was sick and tired of Math. So I transferred to Chemical Engineering department because they had strong professors in Theoretical Mechanics and Strength of Materials. I got the hang of it in about a semester. Then I moved on to Instrumentation Engineering, and later to Radio-Frequency Engineering. That’s the major I graduated with, eventually. The biggest issue with our education is that university lecturers are not motivated. Most of them should be fired.

In my work, I most often use the knowledge that I received at the Radio-Frequency Engineering department. I also sometimes use some low-level programming, and I needed my favourite differential equations a couple of times.

«We had six real break-in attempts in a year. All of them failed.»

Could you say that installers of security systems benefit from rising crime rates and unsatisfactory work of police?

Our business is growing faster when the country is stable. People have extra money that they can spend on luxurious security systems. We can take on large projects and work at a comfortable pace. When things in the country aren’t going well, everybody needs security right then and there. We come in the morning, install 15−16 detectors, and are out by night. Then, it is a constant race against time and constant stress. 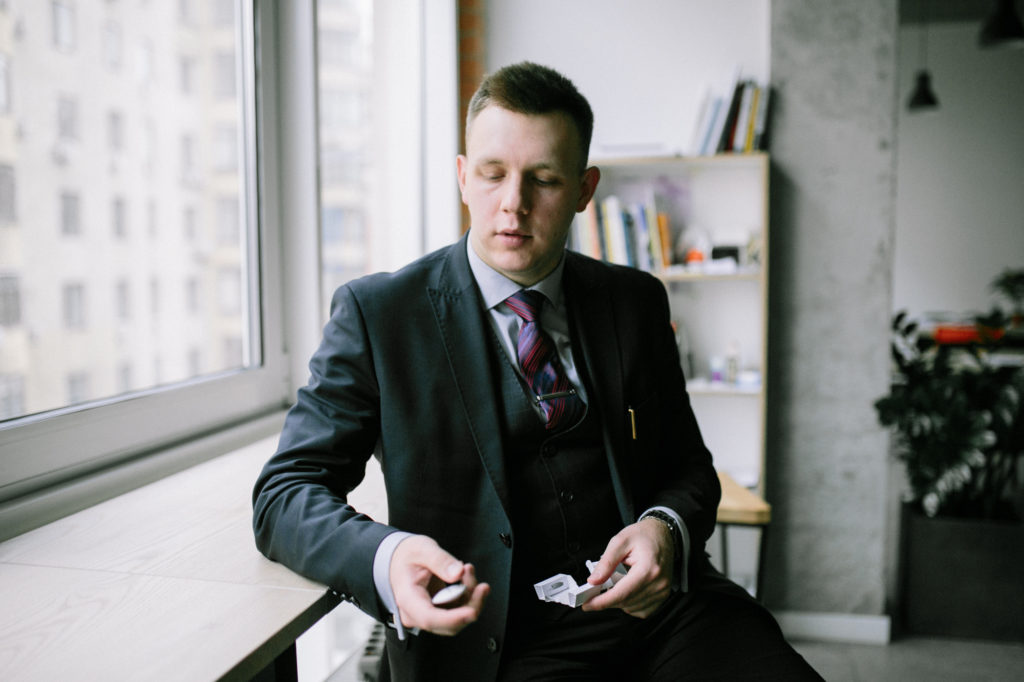 Our main market are cottages in Kyiv suburbs. We are not very interested in the apartments, we don’t want to compete with the market’s big names in this segment. We are currently getting new clients through word-of-mouth: people who know us introduce us to the others. We need to upgrade our website and develop further through advertising. Then, we plan to scale up by a standard scheme: more orders — more installation teams — more managers.

Unfortunately, most of the skills that are required for the work that we doing are much more complicated that the ones you can obtain at a Ukrainian university. That’s why we are hiring students who are in their 2nd or 3rd year to work part-time. Or graduates of professional colleges who have obtained some practical knowledge and hands-on experience with the hardware. Some of the colleges have opened household appliances repair shops on their premises.

Is there an arms race between you and the criminals?

There used to be one. However, nowadays without an insider in the manufacturing company it is almost impossible to foil a detector. If they jam GSM-signal, a notification is sent to the control panel. If they jam the detectors, we see it immediately. If they cut the detector cables, we see that, too. One foolish thing that an installer can do is to put the hub near the entrance, this will give the burglars one minute. If the installer puts the hub deeper inside, break-in becomes impossible.

We work in partnership with a private security company. We have their people on guard at our control panels. They get dispatched when there is an alarm. In a year, we completed about 200 orders, and we had six real break-in attempts. All of them failed. 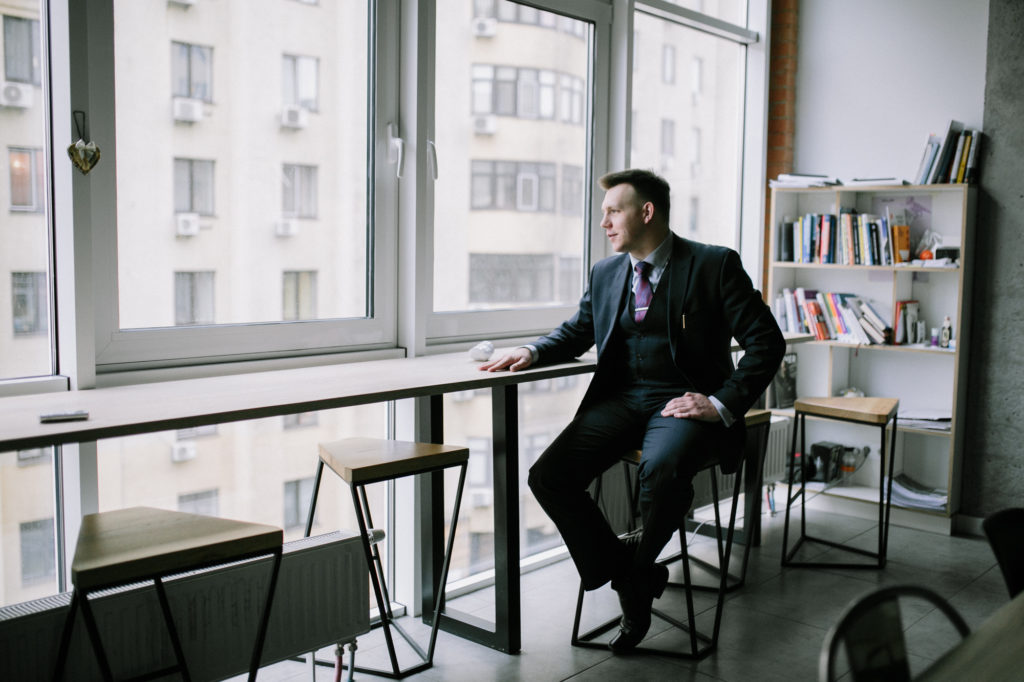 One time, the burglars broke in through a shutter, but didn’t have time to take anything and ran away. There was a case when drunk servicemen broke a metal frame of a kiosk, tore insulation out, smashed a plasterboard wall, knocked a fridge over, and spent three minutes inside before they were caught by the dispatched team. Once, the burglars broke into a guest house, ripped a TV set off the wall, jumped outside, and our partners were already waiting for them. They put the TV down in the snow, and that was it.

What would you advise to people who want to install a security system in their home?

Not to buy into cheap offers. People are googling ‘home security alarm, fast installation’. Most often, these are autonomous China-made options that only send text messages to homeowners. They can easily be jammed. The jamming device costs under $160 in the electronics street market.

If we are talking about installing a security system in the apartment, the offers on hardware start at $300. The price of the installation should be about $80−120. It is the same here — don’t get carried away with the cheapness, or you will pay twice as much. Otherwise it will turn out that the detectors are not tuned well enough, and you will have false alarms. Later, clients ask us to fix this.

It is a scam if you are offered apartment security for less than $8 a month. This money doesn’t buy security, this only pays for communication services.

«It is the first time we see nice-looking detectors»

As an installer, what do you like Ajax for?

I have never seen a system that could be programmed as fast as this one. Yesterday we had 19 Ajax detectors to tune, and it took us under an hour to create an object on the control panel. The installation will take us another day. It usually takes over 3−4 hours to program a hub, a couple more hours to work with the control panel. If the system is wired, we then need to do the work with the wires, lay them behind the skirting boards and door architraves. With wired systems, it would take from two to five days to connect 16 detectors. 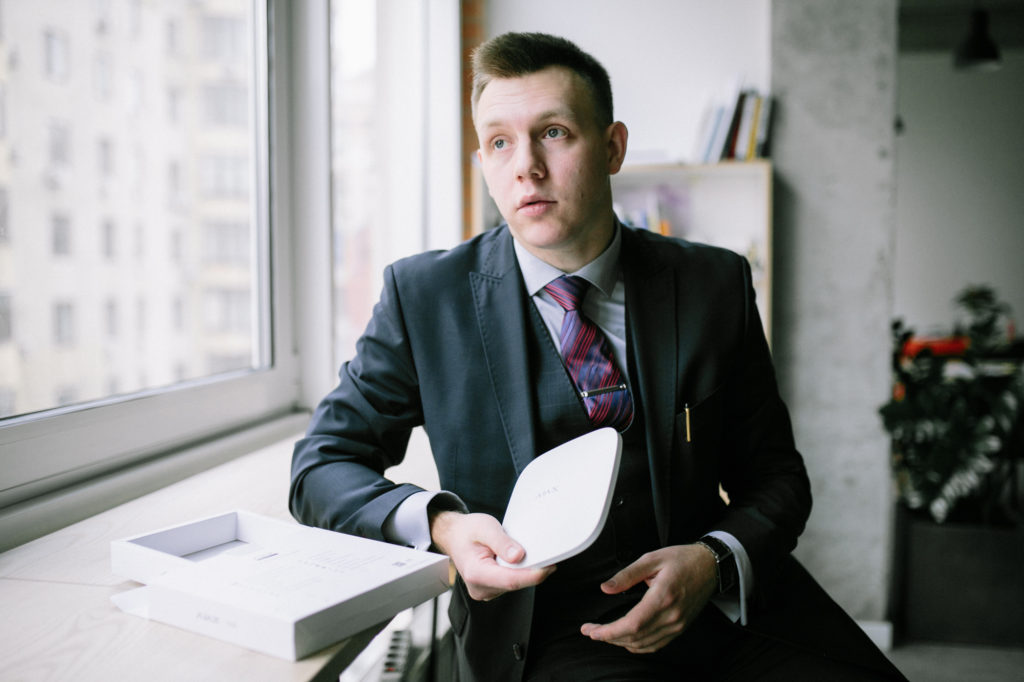 Design is an important achievement of Ajax team. It is the first time we see nice-looking detectors. Their price is also nice. Before Ajax, decent wireless systems cost a fortune.

What kind of improvements or new products are you expecting from Ajax?

It would be nice to have a small internal siren with a LED that would indicate from the outside that the object is protected by a security system. It would also be good to have curtain type detectors with a narrow angle lens. If I am not mistaken, the field of view of a standard motion detector is 88,5°. To cover the window area, you need to have less than 10°.

Ajax flood detectors are also cool. But it would also be great to have control of pipe valves. So that we could turn the water supply off when we get a flooding signal. 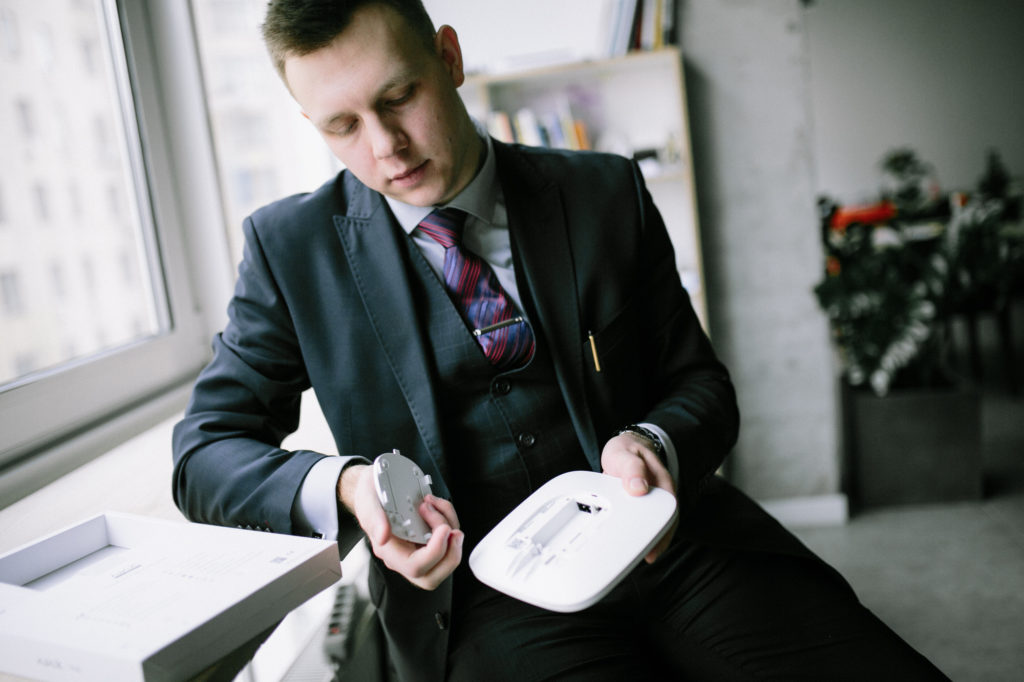 Hubs are good for small houses. For bigger ones, you need range extenders, and we are waiting for Ajax to start making them. Also, outside the city the connection is crappy. It would be great to have a 15dB antenna or to have outputs to connect to an external one.

Do you think your company has perspectives in smart home segment?

Yes, because the generation of geeks is coming. They will grow up and start ordering smart homes, that’s when this segment will grow. Personally I want to get autonomous from central heating networks. I have an idea to install a boiler and only switch it on when I need it. I don’t need to heat my apartment when I am not there. 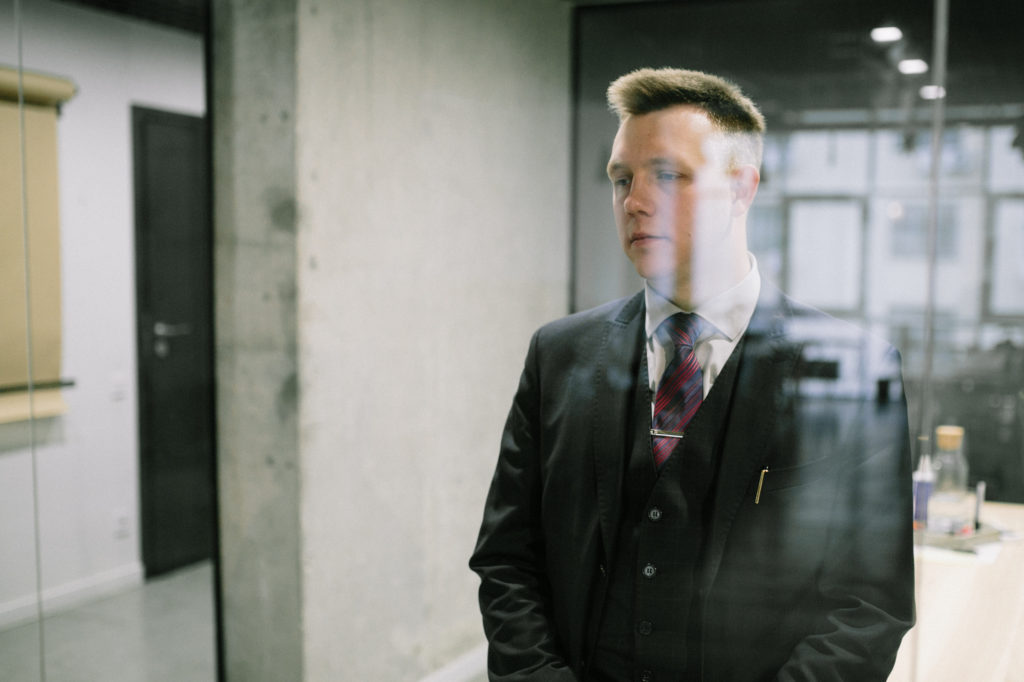 Abroad, you don’t see very often that heating networks extend across the city. Every building has a stand-alone boiler room. It has water supply, often from a well near the building. You also don’t have to lay electricity cables from far away. The efficiency of solar batteries is growing. My dream is autonomous homes. This is something I would like to specialize in. I hope I could be doing it in 10−15 years.