You can select the broadcast language in the description on YouTube.

What was presented at Ajax Special Event: One more link

Photo on demand: next step in the MotionCam evolution

To help Ajax users eliminate unwanted stress in one click, MotionCam detectors will get the ability to take photos on demand. The feature will be available in the new product line to be released in the first quarter of 2022. So both versions — with and without photo-on-demand support — will be available on the market.

Initially, the software architecture of MotionCam detectors did not provide the ability to take photos on demand — the camera was only activated in case of an alarm. This limited functionality dismissed the privacy issue. With such a detector, every user is sure that they are not being spied on.

However, the request for the photo-on-demand feature remained on the agenda of the market. To provide Ajax users with more photo verification options, the company’s engineers had to re-invent their own detectors while taking care of the privacy issue.

Photo-on-demand will be supported by special versions of MotionCam detectors. Along with the hardware release, the new Privacy menu will appear in the hub settings. This menu will contain settings for accessing the sensitive visual data in the system: photos from MotionCam detectors and streams of integrated surveillance cameras.

With these settings, you can also restrict when a photo can be requested: always or only when the detector is armed. Viewing photos is available only for users to whom the administrator has granted this permission.  Thus, the new detectors ensure peace of mind for the users and Ajax’s commitment to respect their privacy.

Also, with the new detectors of the MotionCam lineup you receive the visual verification of fire alarms. All you need is to create a scenario in the detector settings, indicating which of the Ajax fire detectors within the system can request to take a photo.

Hub 2 will be available in two versions: Hub 2 (2G) and Hub 2 (4G). We’ll remain to produce the version with a 2G modem and add a new one — with a more advanced modem supporting 2G, 3G, and 4G (LTE) networks. Hub 2 with an advanced modem will go on sale in the first quarter of 2022. Ajax users can choose a hub that suits their region, considering the available communication technologies. 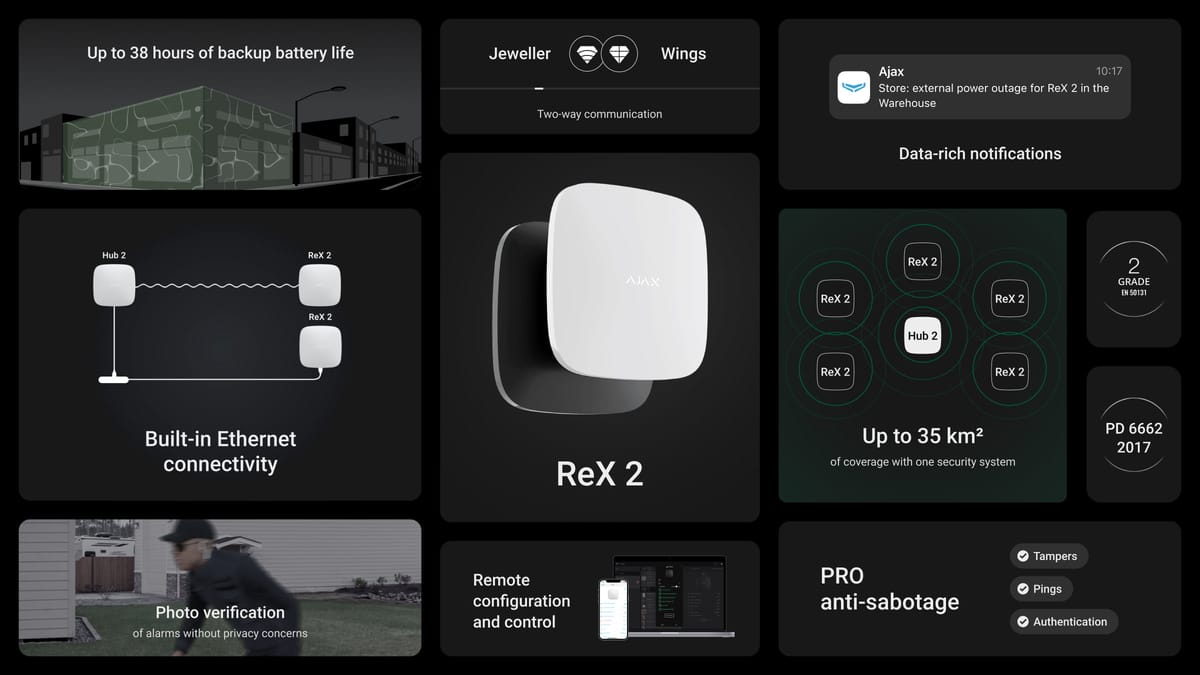 From the technology perspective, the new ReX 2 has gone far beyond the classic radio signal repeater. It creates autonomous groups of devices within the system and optimizes their communication. No matter how many devices are connected via ReX 2, be it five, ten or one hundred, their radio modules automatically adjust for optimal power consumption and instant delivery of events in case of an alarm.

Even having no connection with a hub, ReX 2 receives an alarm from a detector and activates a siren to attract attention. Built-in backup battery provides up to 38 hours of autonomous operation, so sudden power outages do not compromise security.

ReX 2 doubles the communication range of wireless Ajax devices, including MotionCam detectors. One system can have up to 5 range extenders with a total system coverage of up to 35 km². Regardless of the size of the protected area, alarms are transmitted instantly, and the first photo from a MotionCam detector will be delivered in 13 seconds.

The new range extender traditionally supports over-the-air firmware updates. Subsequent updates will open wired Ethernet connection between ReX 2 and hubs — a physical port is already built into the range extender. Even without radio communication with a hub, the range extender will be able to transmit alarms and photos. A hub and ReX 2 just have to be in the same local network.

With Ethernet, the new ReX 2 will be able to transmit alarms, events, and photo verifications through concrete and steel 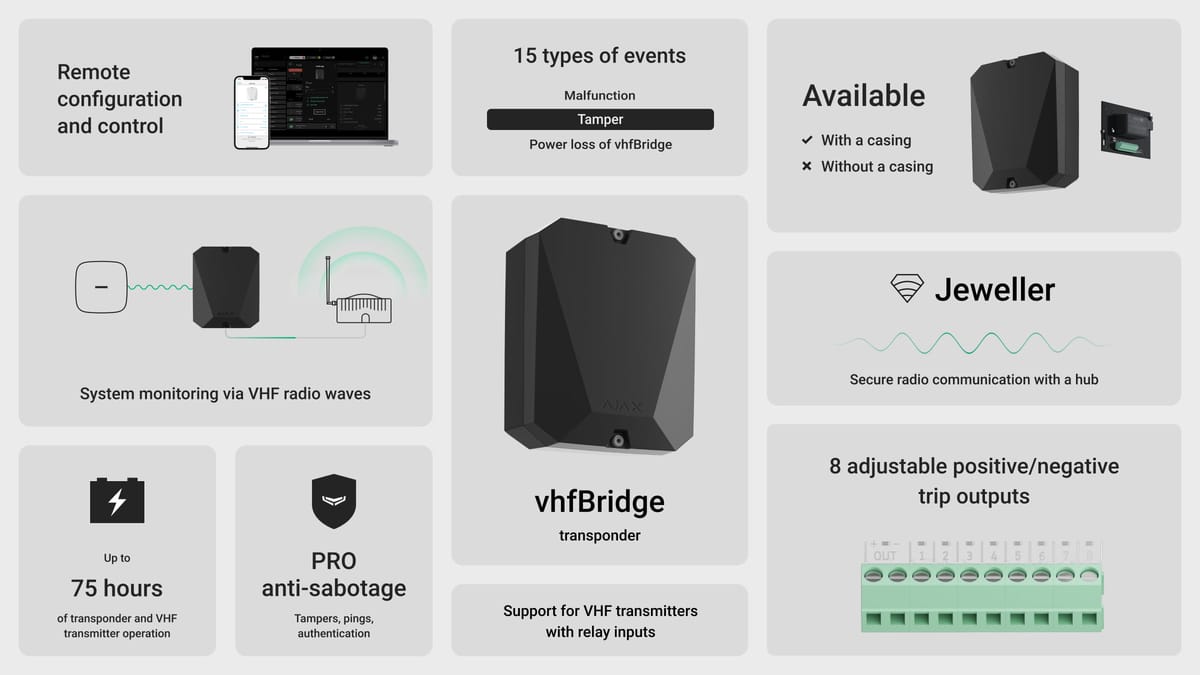 vhfBridge is a module that provides a hub with one more communication channel with a monitoring station. In case of an alarm, the event is transmitted along the chain: from a hub to the vhfBridge module via Jeweller radio communication, then from the module to a third-party VHF radio transmitter via wires, and then to a monitoring station receiver via radio transmission in the VHF range.

With the vhfBridge module, an Ajax system can be used in cities with unstable Internet connection, in the mountains, nature reserves or desert areas. With vhfBridge, you can transmit alarms and system events over tens and hundreds of kilometers.

vhfBridge has 8 outputs for connecting it to a third-party VHF transmitter. Also, in the event of blackout, the module can power the transmitter from the backup battery installed in it. 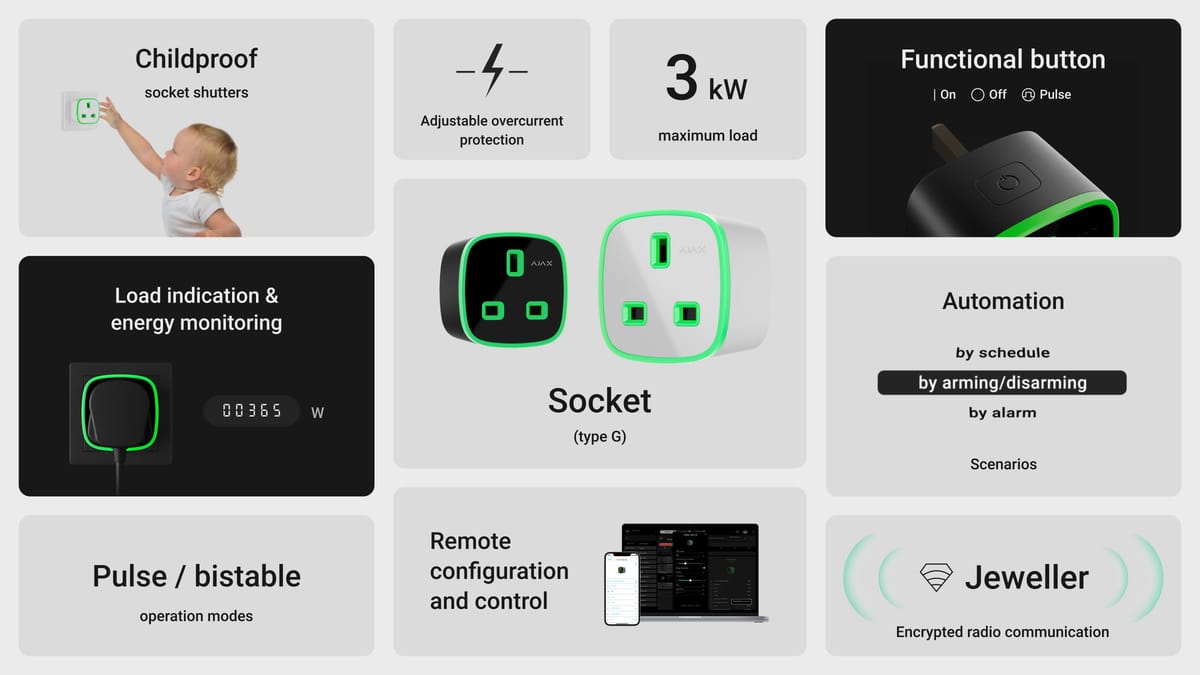 The range of Ajax automation devices is about to become even wider: Socket with a type G plug will go on sale in the first quarter of 2022. But the plug type is not the only thing that will change. The UK version of the device will have a functional button allowing you to control the socket without the app or Button. Also, the settings will become more flexible: a configurable overcurrent threshold, fine-tuning of brightness and resetting of the electric power meter.

The new Ajax socket will have an unprecedented range of over-the-air communication: up to 7 times longer than competitors in the smart home segment. The maximum radius is up to 1,100 meters of two-way encrypted connection which does not depend on Wi-Fi. 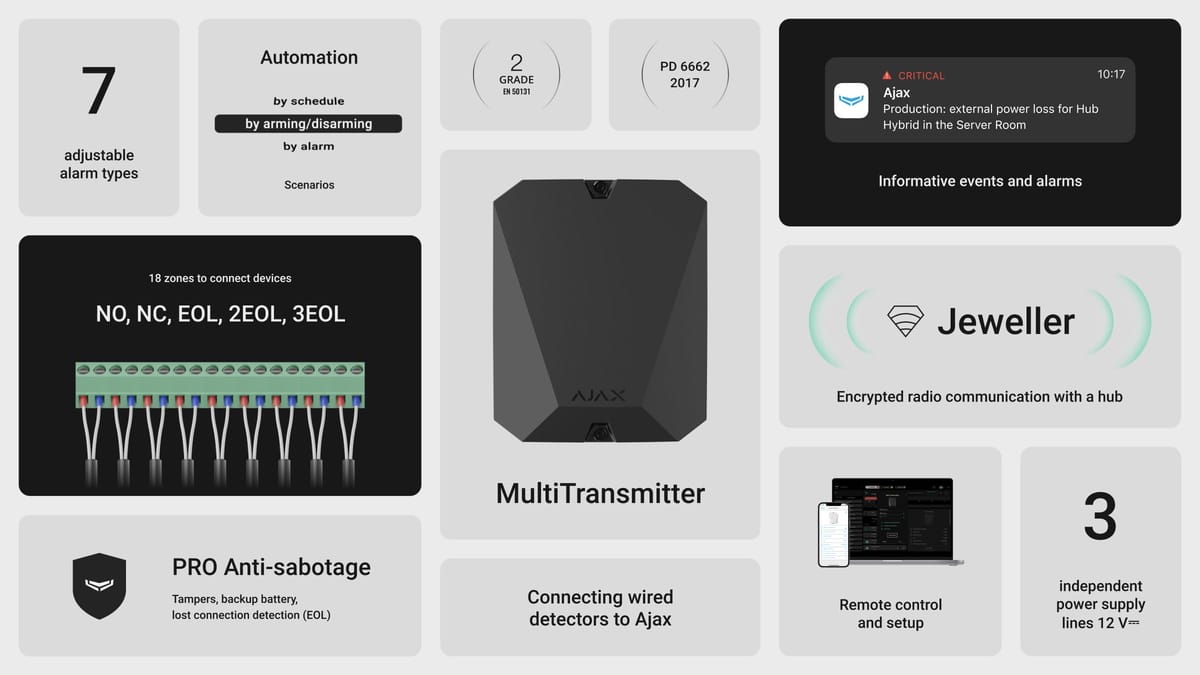 In response to requests from industry professionals, the MultiTransmitter integration module will receive support for detector connection with two and three resistors. In other words, the integration module will be able to distinguish more types of events from the connected wired detectors. This will make renovation more flexible with multi-zone alarms in commercial properties and increase the number of compatible detectors. The updated MultiTransmitter will be available to order in the first quarter of 2022. 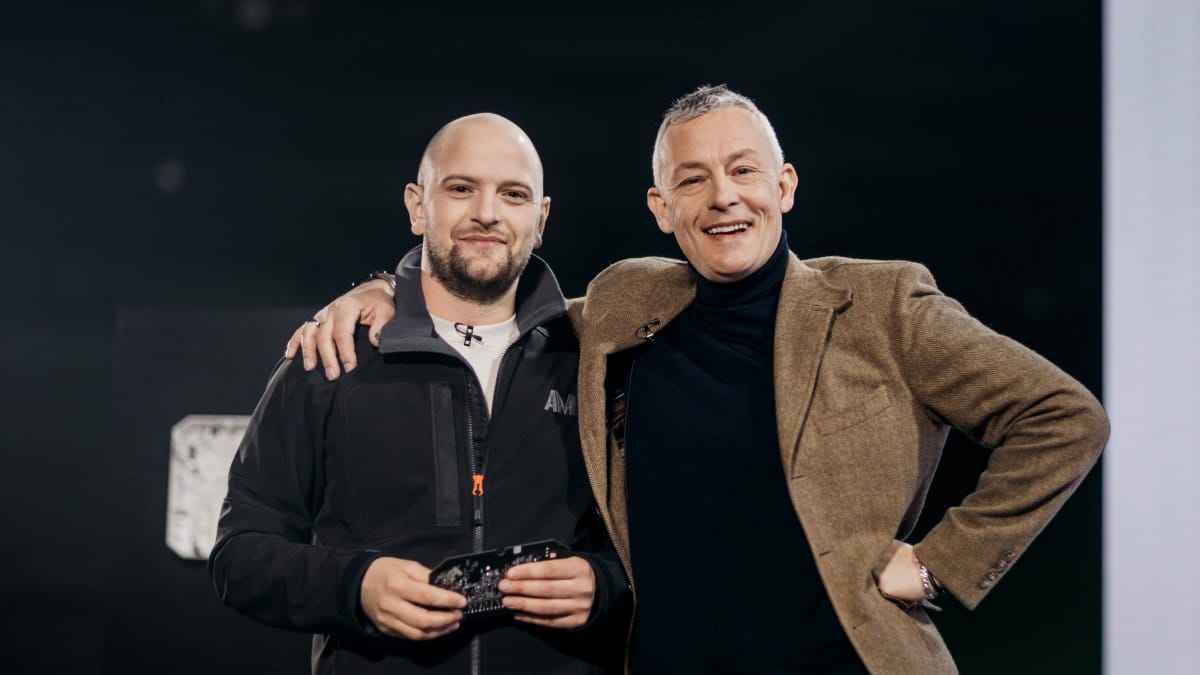 Fibra: one more link in the Ajax ecosystem

One of the most common requests from industry professionals is for a hybrid security system. The combination of wires and radio makes it possible to cover large and industrial facilities.

Today, most hybrid solutions on the market still use the technology from the 1980s. Their wired detectors are relays. And a control panel monitors the voltage on the wire, not the detector operation. However, the detector can fail, an installer can have it short-circuited, and criminals can sabotage a line. Also, there is nothing like remote configuration or control of such a system.

Ajax engineers focused on the technology that would bring the entire user experience out of the wireless system. Fibra was born thanks to the expertise developed since 2011.

The new wired line of Fibra devices has inherited all the advantages of the Jeweller wireless line. Data transmission that is encrypted and protected from sabotage, unprecedented range and energy efficiency, remote control and maintenance, the fastest possible installation — everything that users love about Ajax systems. 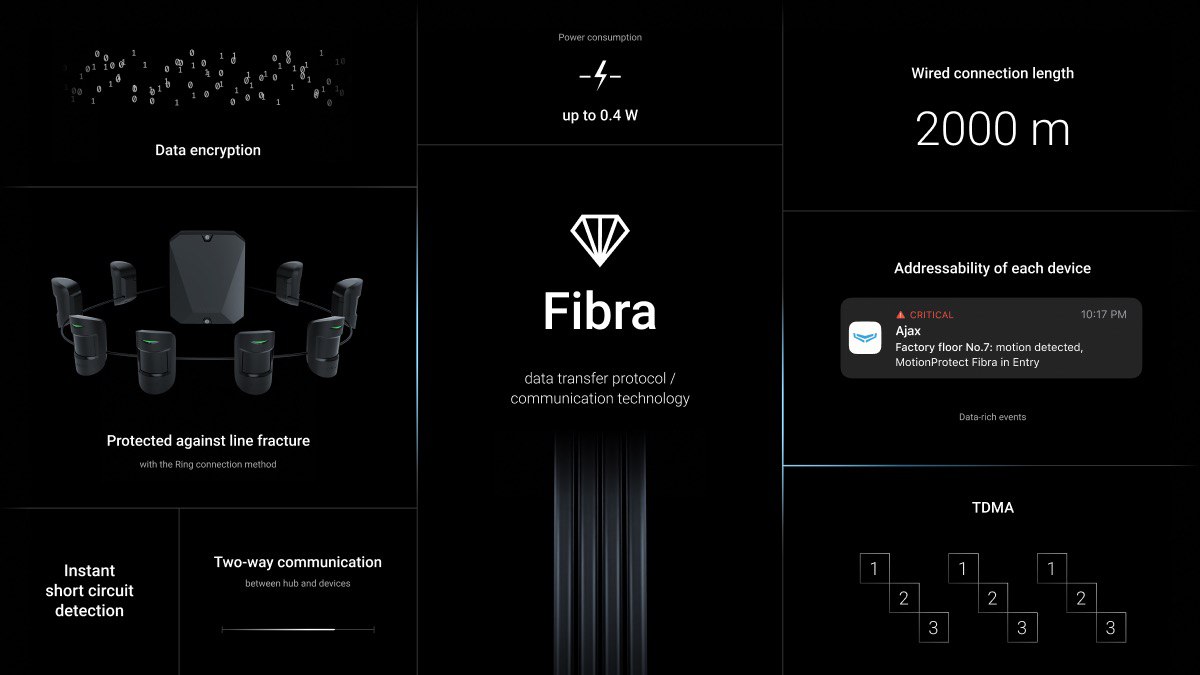 Fibra’s secret sauce is a communication protocol that ensures smooth system operation and the highest energy efficiency. Thanks to Fibra, the detectors consume tens of microamperes. That’s 100 times less than the industry average for digital wired detectors. This low power consumption allows more devices to be connected on a single line and enables longer wired connections.

Another revolutionary aspect of Fibra is easy installation of wired devices. With Fibra, you can use any combination of devices on a line: connect one detector or dozens of different detectors, sirens, or keypads. With a line length of 2,000 meters, Ajax can cover even a multi-floor building.

You don’t need a separate cable to receive photo verifications. They are transmitted over the same cable that the system devices use to transmit events. At the same time, in the Ajax app, devices are organized by rooms and groups, regardless of their physical connection to the hub. 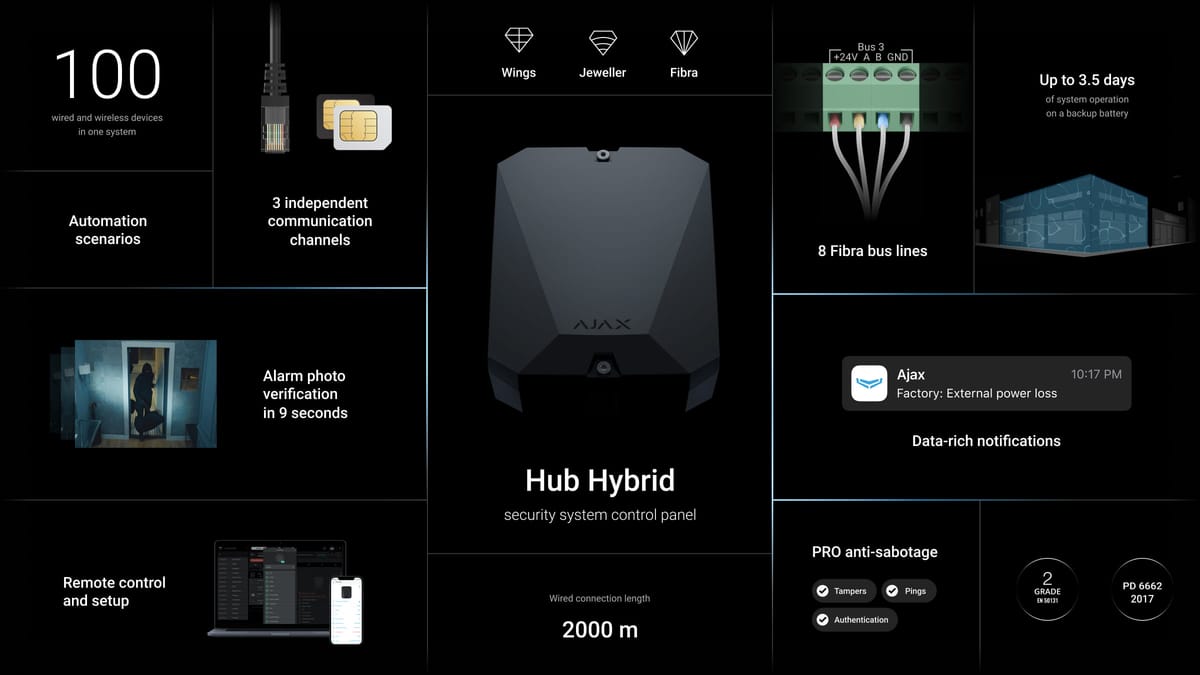 Hub Hybrid supports up to 100 devices, with any ratio of wired to wireless. With built-in Jeweller and Wings antennas and 8 Fibra bus inputs, you have almost an infinite number of system configurations. It is easy to build a star topology with any number of devices on a line, or use eight lines as traditional alarm zones. In both cases, you get an intelligent and reliable Grade-2 system.

Hub Hybrid sets a high standard for professional security systems.
Remote configuration, real-time control and 32 automation scenarios are all built into the new hub by default. A completely seamless user experience that is available to both end users and professionals.

Hub Hybrid will be available to order in the first quarter of 2022.

The wired line has the signature Ajax design with one distinguishing feature — stylish matte finish. The devices, available both in white and black, will fit in any interior.

In addition to design, Fibra devices have inherited easy installation. The SmartBracket mounting panel, familiar to many professionals, has proven itself in the Fibra line. For example, in motion detectors, removable terminals are placed on SmartBracket, so you don’t need to disassemble the enclosure for installation. Also, you won’t damage the electronics during installation.

The DoorProtect and GlassProtect detectors still have to be disassembled, however, Ajax engineers made sure that the process was hassle-free. A perforated mounting panel, an electronic board without fragile parts, and the enclosure itself — each element is designed for installation engineers not to waste time.

The first Fibra release will include nine devices that almost completely copy the wireless line. Improvements include an additional reed switch in DoorProtect and DoorProtect Plus.

Two more versions of the MotionCam Fibra motion detector with photo verification are being developed — with and without photo-on-demand support, as well as the MultiTransmitter Fibra module for integrating third-party wired detectors.