Ajax MotionProtect Curtain: The history of the development of the outdoor curtain detector with pet immunity 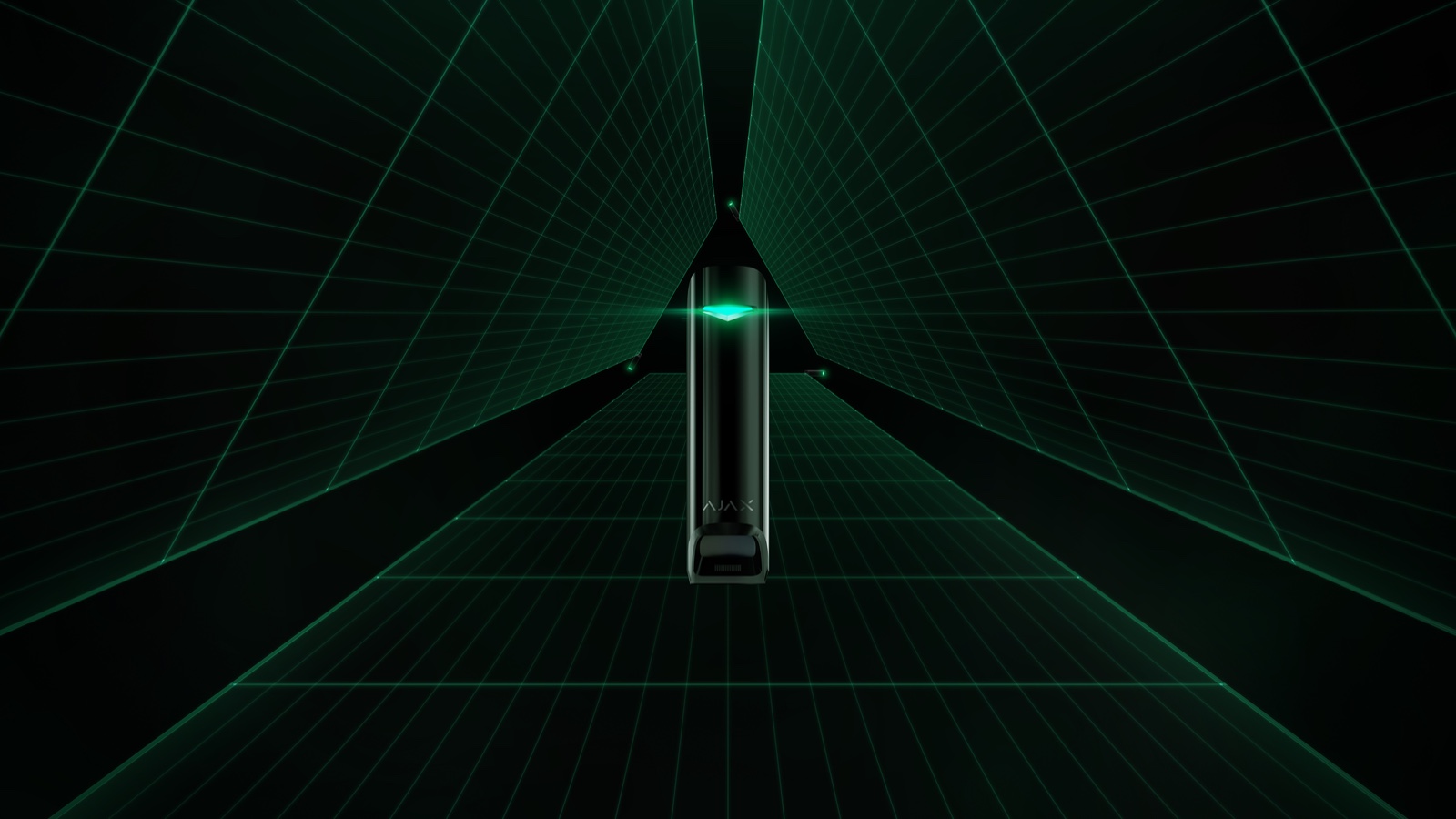 The security system must detect threats as early as possible — that is a fundamental rule of security. If you have an outdoor area around your house, outdoor detectors should be installed there. In order to detect an intruder even before a door is opened or a window is broken, it needs to trigger the sirens and give a head start to the security company or the police squad on duty. As a result, it significantly increases the chances of preventing damages and protecting the health and lives of people.

The protection of a territory can be implemented in two ways. If the property is fenced and the outsiders are not allowed to enter, motion detectors with a wide horizontal view angle and detection range are used. This was precisely the device Ajax used to launch its range of outdoor security devices: MotionProtect Outdoor. Otherwise, in the cases where the detection zone needs to be limited, curtain detectors are used. They detect motion in a narrow zone preventing anyone from approaching a door or window, enter a terrace, or climb up a balcony unnoticed. They use an invisible curtain to fence off the territory where people can move freely. 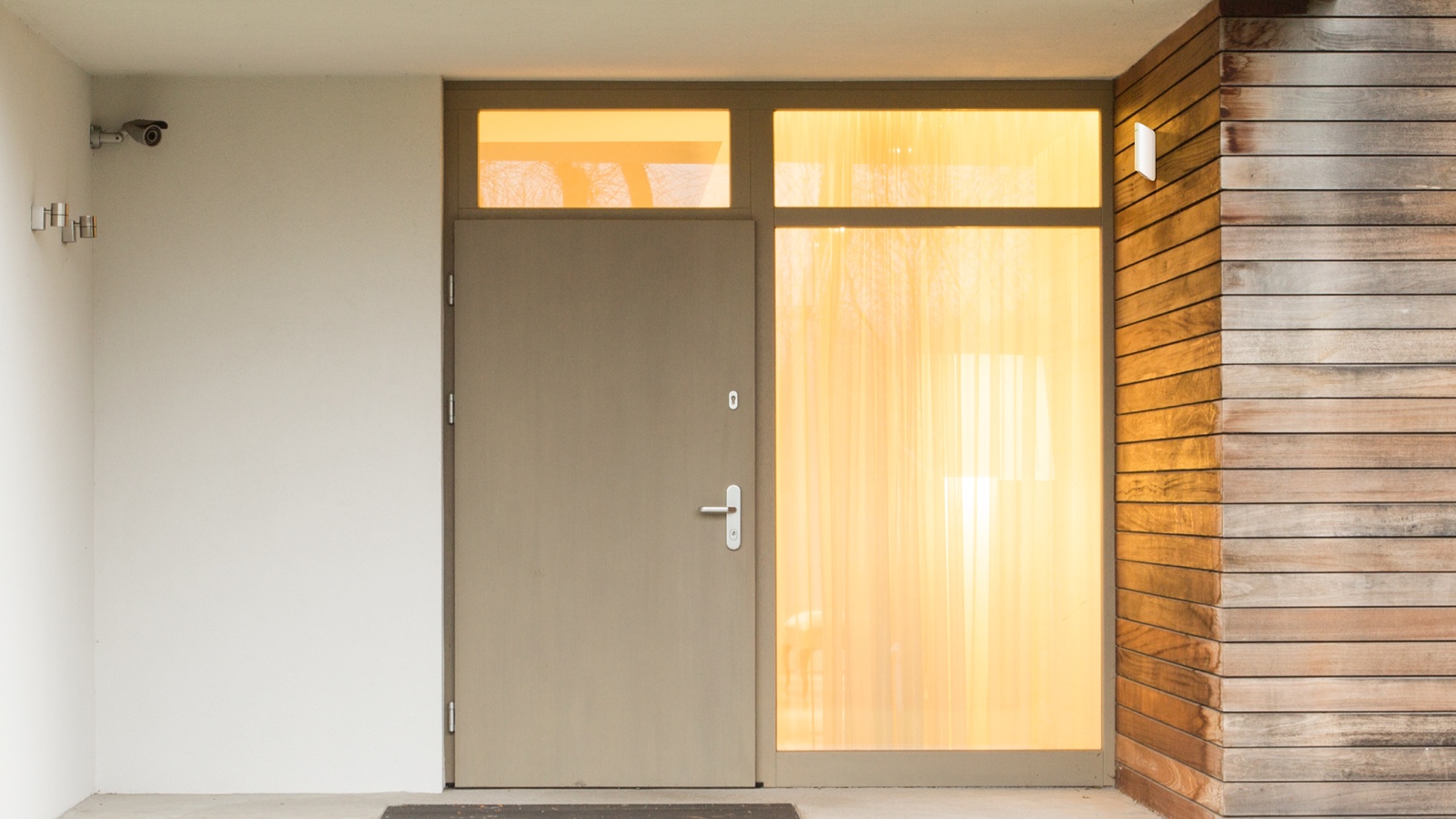 In March 2019, we presented the first Ajax curtain detector — MotionProtect Curtain. In this article, we will talk about everything that had preceded the release: the decision regarding the capabilities of the new product; the reasons for the development of two unique optical systems; the capabilities of the ZOE algorithm; and prototyping and testing that guarantee the highest accuracy of detection of humans.

Clients and partners from Italy, Spain, Portugal, France, and other countries of South-Western Europe were the initiators of the release of the new device. In these countries, panoramic windows and terraces that can be used to break in secretly are very popular. In order to reduce the risk of intrusion, the outer perimeter of a building is protected with narrow-angle motion detectors. In addition, “curtains” protect the valuables inside the premises: safes, document vaults, and artworks. We used these application scenarios as our springboard.

Before starting the development of the MotionProtect Curtain, we conducted comprehensive market research: the technologies and capabilities offered by the leading market players; the expectations of the security professionals and users; the areas where a technological or functional breakthrough can be made.

We determined that the best representatives of this class of detectors were equipped with anti-masking systems and some of them could operate from batteries for a long time. But as far as range and reliability of communication are concerned, no device could compete with Ajax devices. The majority of curtain detectors are not able to distinguish a pet from a person, and, at best, they can ignore heated air currents. Meanwhile, only one manufacturer offers detectors that are immune to pets.

That was a challenge! Our MotionProtect Curtain curtain detector must identify humans with 100% accuracy and avoid reacting to interferences and reduce the responses to animals as much as possible — regardless of the conditions at the premises, you must be able to rely on its alerts. Operate for years on bundled batteries and always maintain a connection — Ajax customers are used to the reliability and the ease of maintenance of our equipment. Meanwhile, it should be compact and have a great design looking nice outdoors and indoors alike. 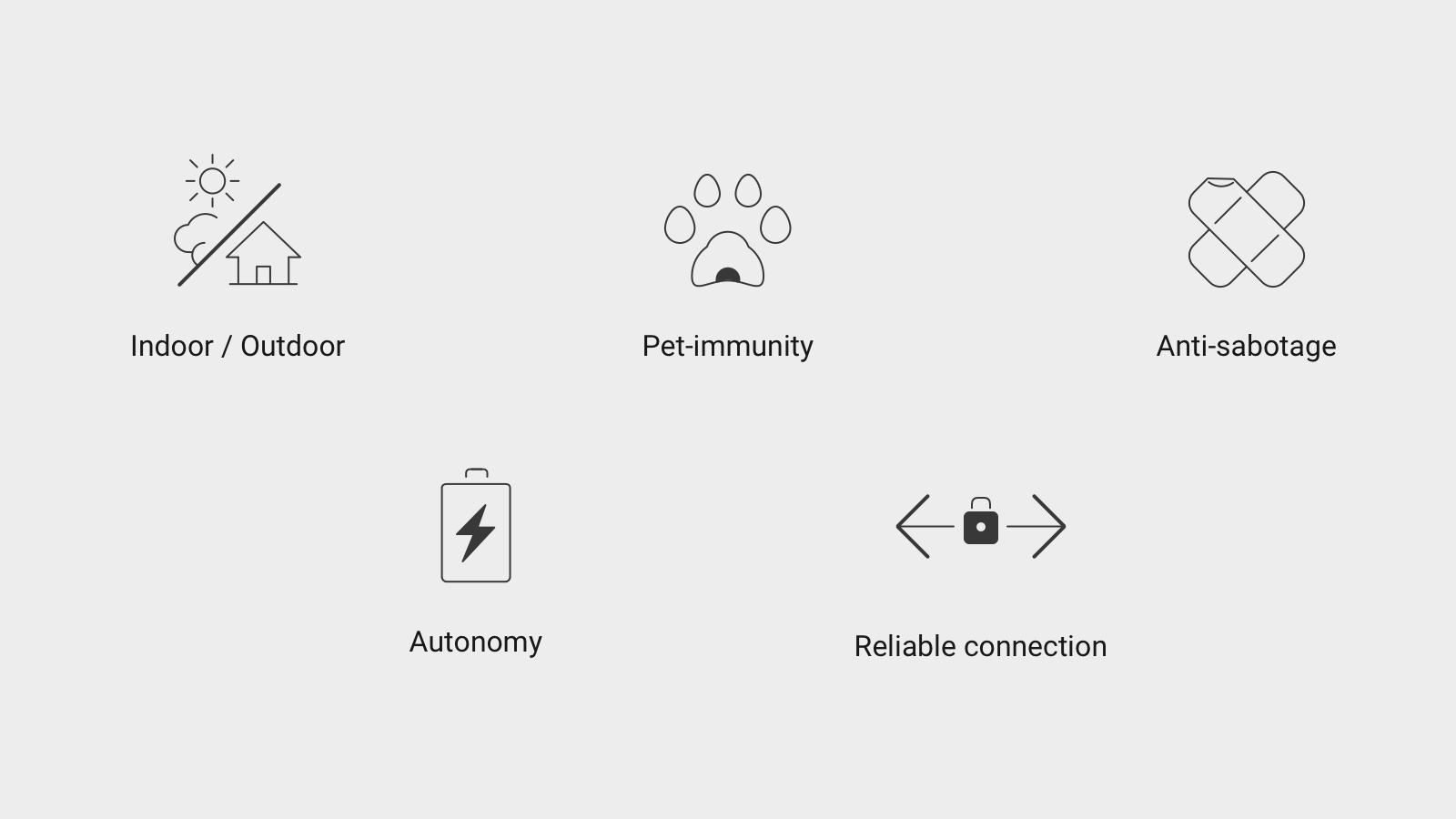 Motion detection system is the key element of the curtain detector. The simplest detectors use only a single PIR sensor and a focusing optical element: a mirrors or a Fresnel lens. More expensive models are equipped with an additional microwave sensor to filter natural interferences.

We began the development by testing the capabilities of these technical solutions. Using the components of the Ajax motion detectors MotionProtect and MotionProtect Plus, we assembled test benches. Without the bodies or connection to the hub — only the most essential hardware to collect information about the events occurring in a narrow field of view. In the lab, we simulated everything that a curtain detector can encounter at the actual premises: warm air currents, moving animals, birds, bushes and grass swaying in the wind, normal (and even strange) behavior of people. Then, we studied what triggered our test benches and how they “saw” these events. The results of a single PIR were lamentable. A system consisting of a single PIR sensor and microwave sensors with a horizontal view angle of 6° could ensure maximum protection against natural interferences but could not differ a human from an animal.

Our “curtain” had to be able to receive more information about the events in the detection zone. Therefore, we adopted the approach used in the outdoor motion detector MotionProtect Outdoor: the system consisting of two PIR sensors. Only they were not narrow multidirectional “rays” but rather discrete “fan-shaped” zones: 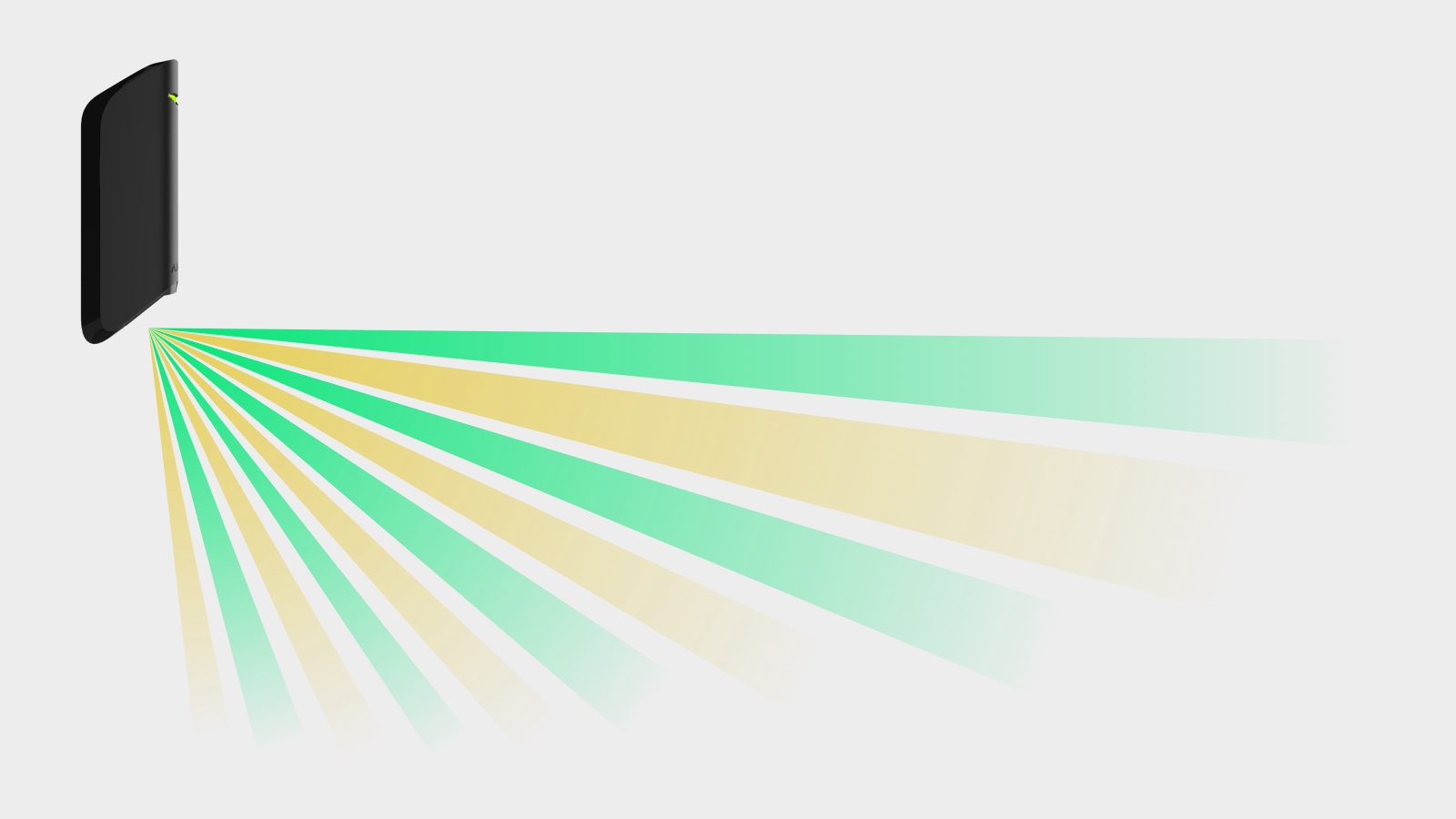 After assembling new test benches, the developers simulated the behavior of people, animals, birds, and all sorts of natural interferences in the lab. They changed the ambient temperature, studied the effect of speed and direction of movement, and then analyzed the data collected by the sensors. The results were highly promising! We now had a prototype of the optical system that enabled us to develop pet immunity. 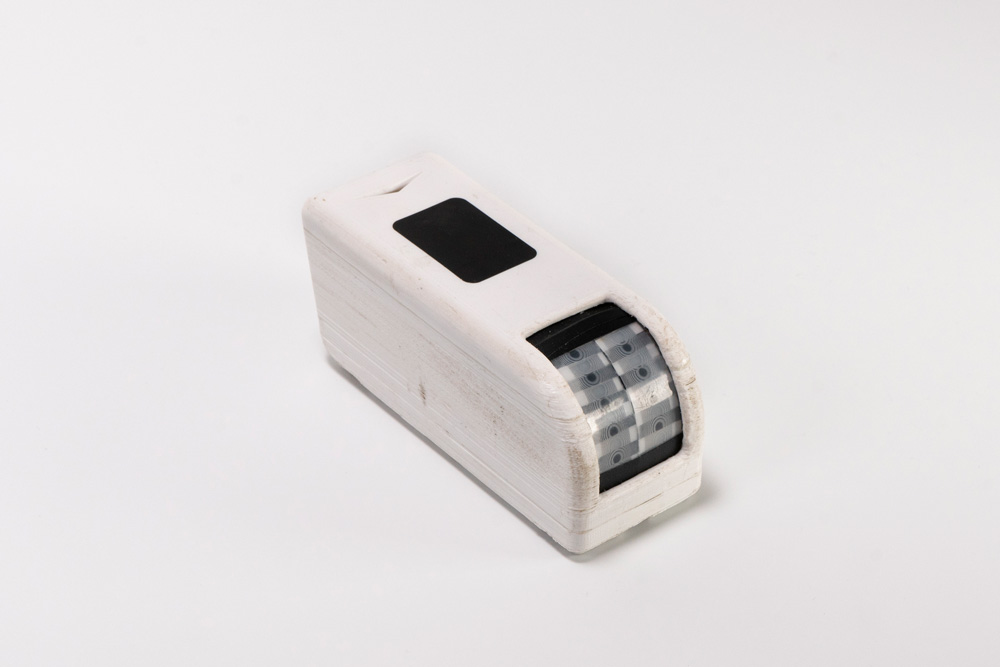 But it was impossible to purchase components for it. Whereas the optical systems of curtain detectors based on PIR and microwave sensors were commercially available, paired Fresnel lenses that projected infrared radiation onto two PIR sensors simultaneously were not commercially available. In order to develop the curtain detector we had conceived, we had to create a new optical element, and that also meant establishing its manufacturing.

We resolved this daunting task through the R&D unit of Ajax Systems. Had we engaged a contractor, the project would have been put on hold for several months. Since it was important for the device to be compact, we chose a focusing mirrors. We calculated the number, area, and the direction of the 10 faces placed onto two panels — one for each PIR-sensor. We had to walk the entire path from the design of optical elements using specialized software and perfectly polished metal models to batch production of parts featuring special specular coating. Then, we built test benches using the new optical elements and tested the system in action: on people, animals, and interferences typically encountered outdoors and inside premises. 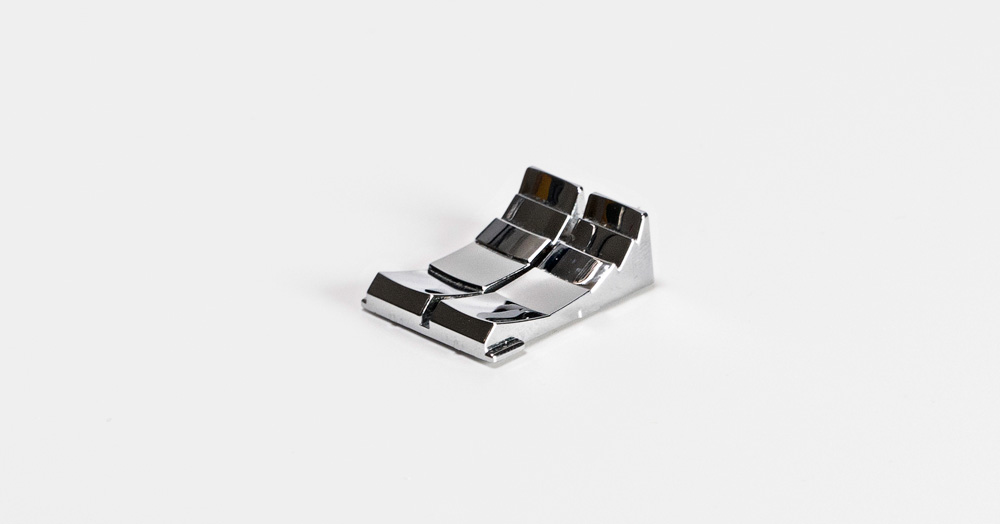 Four months into the development of the new detector, we had a suitable optical system. It offered a horizontal view angle of 6° and could detect motion at a distance of 11 meters. And most importantly, it collected sufficient data to tell apart a human from a pet or a bird and minimize the chances of false alarms triggered by natural events.

From test bench to detector

The next generation of prototypes could already be called Ajax detectors. Still without a body, but it already had an optical system, a processor, memory and a radio communication module, firmware, and the ability to operate as part of a security system. This stage of development entailed several parallel processes. The engineers worked to determine the optimal configuration of the internal components, modified the circuit boards, and thought through the production and assembly process. The body was developed — the internal design and the exterior. 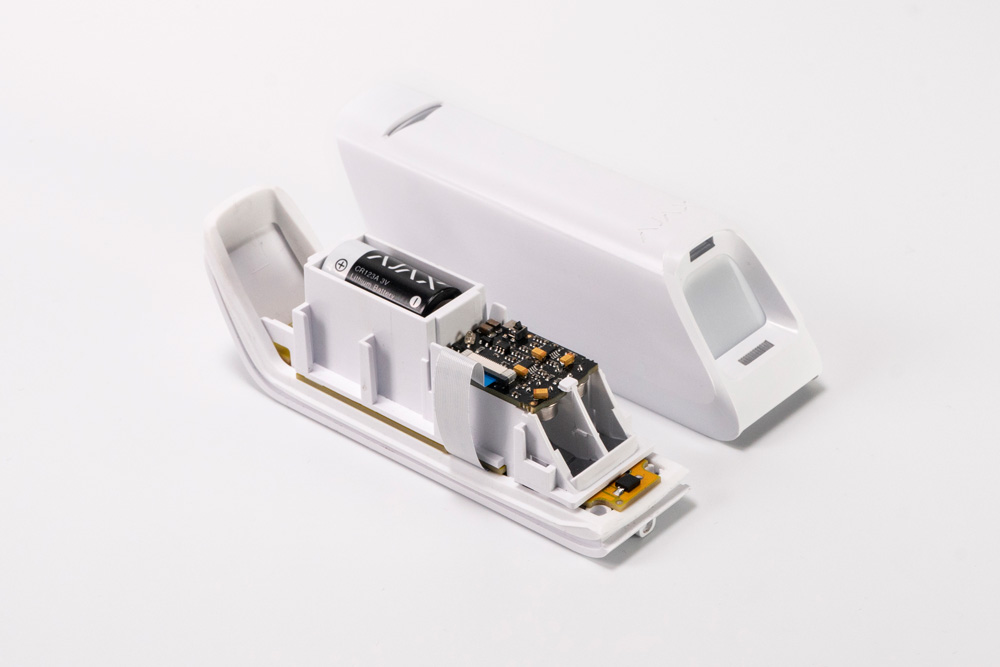 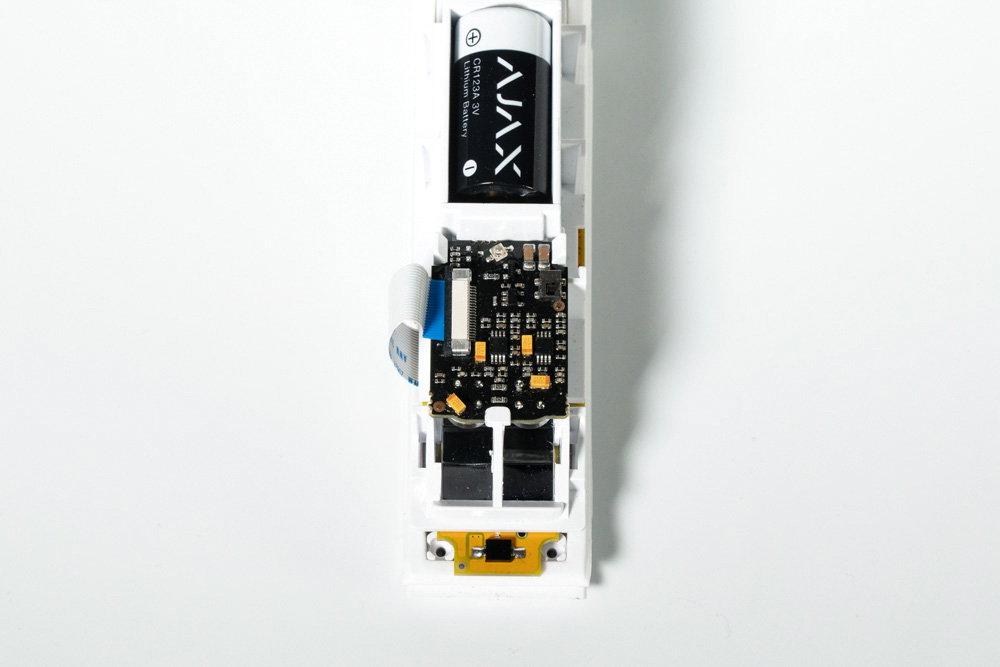 Ten months into the development, we had functional detectors inside 3D-printed bodies resembling the final product as close as possible in terms of the hardware. Now, we were sure that the design was suitable for large-scale batch production and we could now start developing a new signal analysis algorithm. 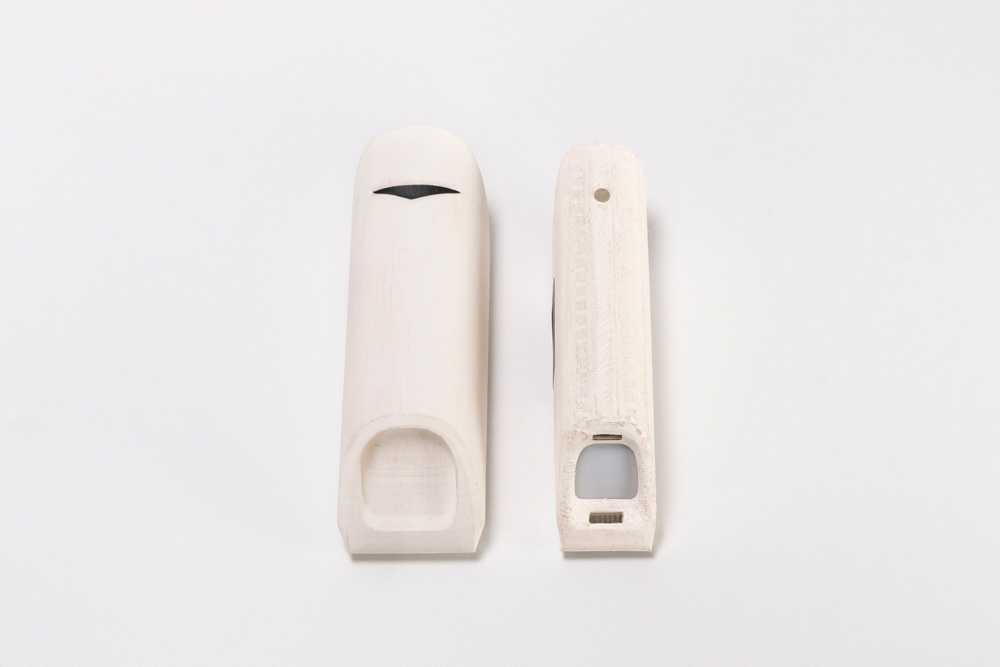 The basis for the development of the new software included SmartDetect and LISA algorithms used in the Ajax indoor and outdoor motion detectors as well as the understanding of how the optical system of MotionProtect Curtain “sees” people, animals, birds, and natural interferences. We collected 30 identical detectors and installed firmware with a draft version of the ZOE algorithm on them so that the devices could make decisions on their own with respect to which signal can be regarded as an alarm to be transmitted to the hub and which one to ignore as interference. And we have fitted them with special “black boxes” that retain all the original data in the detector memory when the latter are triggered.

The prototype detectors were tested at real premises located in Ukraine, Italy, Spain, Greece, and Cyprus: urban and suburban land plots, apartments, houses, and offices with the most unfavorable conditions that the curtain detectors could encounter. When the sun blinds the lens, the body is filled with rain, trees, bushes, and tall grass appear in the field of view, and animals of various dimensions continually trigger false alarms. Since it was summer, the R&D team moved into a giant industrial cold store with a temperature of -20°C for several days to test the operation of the device under extreme conditions. 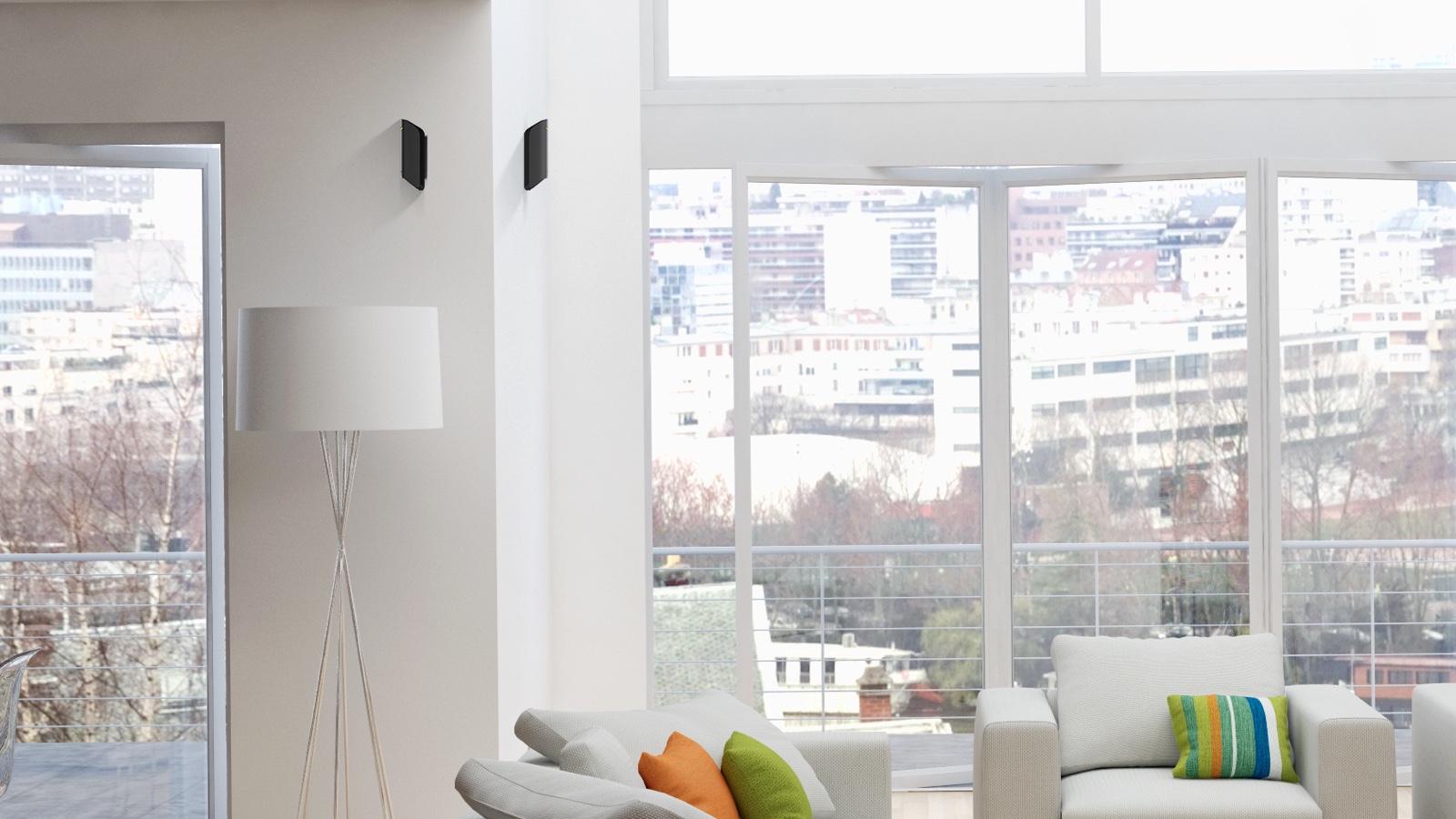 MotionProtect Curtain in a black body (indoor use only)

Over the course of a month, we perfected ZOE: we received false alarms, compared the data from the “black boxes” with the detection circumstances, introduced corrections to the code, and updated the software of the test devices. Each new version of the algorithm reduced the number of false alarms until we achieved absolute accuracy in human detection and effective filtering of interferences.

The motion detection system of the MotionProtect Curtain curtain detector offers two modes: with active pet immunity and without it.

When the pet immunity is enabled, PIR sensors represent independent data sources. Once in the detection zone, a person crosses two fans of rays provoking signals from two sensors with the characteristic symmetry and coverage. The ZOE algorithm instantly analyzes the data by comparing the parameters of the signals and reaching a verdict: intrusion. Animals, glares, air flows trigger signals of different nature, and the MotionProtect Curtain ignores them as false alarms. In this mode, the curtain detector can operate outdoors.

When the pet immunity is disabled, two PIR sensors operate as a single detection system: the MotionProtect Curtain is as sensitive as possible and has a maximum detection range. In order to trigger it, it is enough for a person to cross any of the rays. With allowance for the fact that the ZOE algorithm does not compare the character of the signals in this mode, the efficacy of protection against false alarms is lower. We recommend using MotionProtect Curtain with pet immunity disabled only inside the premises without potential sources of false alarms.

Fourteen months into the development, the second street motion detector, MotionProtect Curtain, appeared in the Ajax product range. With ultra-precise detection of humans, effective immunity to animals, and protection against false alarms. Operating indoors and outdoors. With reliable and secure Jeweller technology and outstanding autonomy. Can be configured remotely through the app. Ready to secure an apartment, a detached house, and commercial or production facilities. 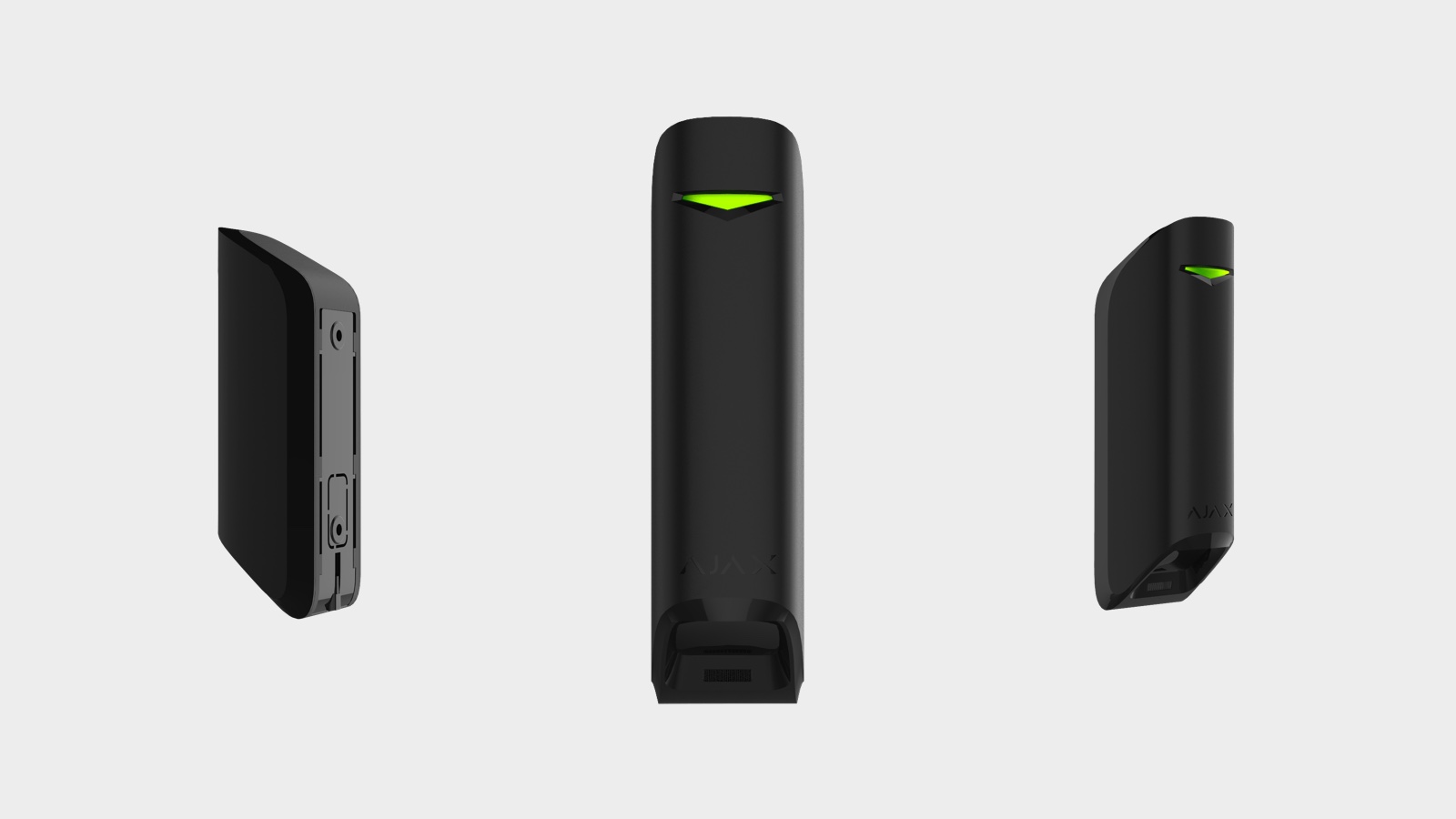 Refer to the device User Manual for more information.

You can purchase a MotionProtect Curtain curtain detector from an Ajax Systems partner in your region: