OS Malevich 2.9 update brings significant changes for users and security industry professionals. The new data import feature simplifies the process of replacing old hubs with new ones. Detectors that work incorrectly can now be deactivated remotely and still be part of the system. Button and Transmitter got new types of alarm notifications, adjustable in the app. Automation devices can now work in pulse mode and activate electrical appliances for a short period. The in-app panic button can now be used anywhere, not just at the protected property. Upon activation, it sends smartphone coordinates to an alarm monitoring company and all system users.

All Ajax hubs will upgrade to OS Malevich 2.9 within four weeks after the official release on. The update installs automatically when the system is disarmed.

With the import feature, all settings, connected devices, security groups, scenarios, and users can be easily migrated from an old hub to the new one.

Engineers and user-administrators can install a more advanced hub model on the protected property without reconnecting each detector. Import feature also allows engineers to quickly restore the security system’s integrity if its hub fails for some reason. Even if the system has hundreds of devices, dozens of scenarios, and several ReX range extenders, data import will take less than 15 minutes.

The process is almost fully automated. Just connect the new hub to the Internet, switch off the old one, start the data import, and follow instructions in the app.

Wrong installation, bad mounting choice, low signal level, broken tamper, or any other malfunction can easily result in a false alarm. With the release of OS Malevich 2.9, engineers can deactivate malfunctioning detectors remotely. No need to delete them from the list of devices. No need to rush to location.

Temporary device deactivation function became one of the most popular requests from our European PRO-users. Now the functionality is available for all Ajax users.

Pulse mode for Socket and WallSwitch

Socket and WallSwitch (with firmware version 5.54.1.0 or higher) as well as Relay (with any firmware version) can now toggle switch devices powered from the mains for a defined period: from 0.5 to 255 seconds. When the timer expires, devices switch back to their initial state: on or off.

Previously, pulse mode was available only in the Relay settings. It allowed electrical contacts to touch for up to 15 seconds and let the current flow. At the same time, Socket and WallSwitch could work only in bistable mode — closing and opening an electric circuit following the user’s command or executing a specific scenario. An additional command was required to change their state again.

With OS Malevich 2.9 update, users have more options for automating lighting, electromechanical locks, and electric valves that control the water supply. Unlike Relay, WallSwitch and Socket can control electrical appliances without intermediary relays, rechargeable batteries, or an inverter. 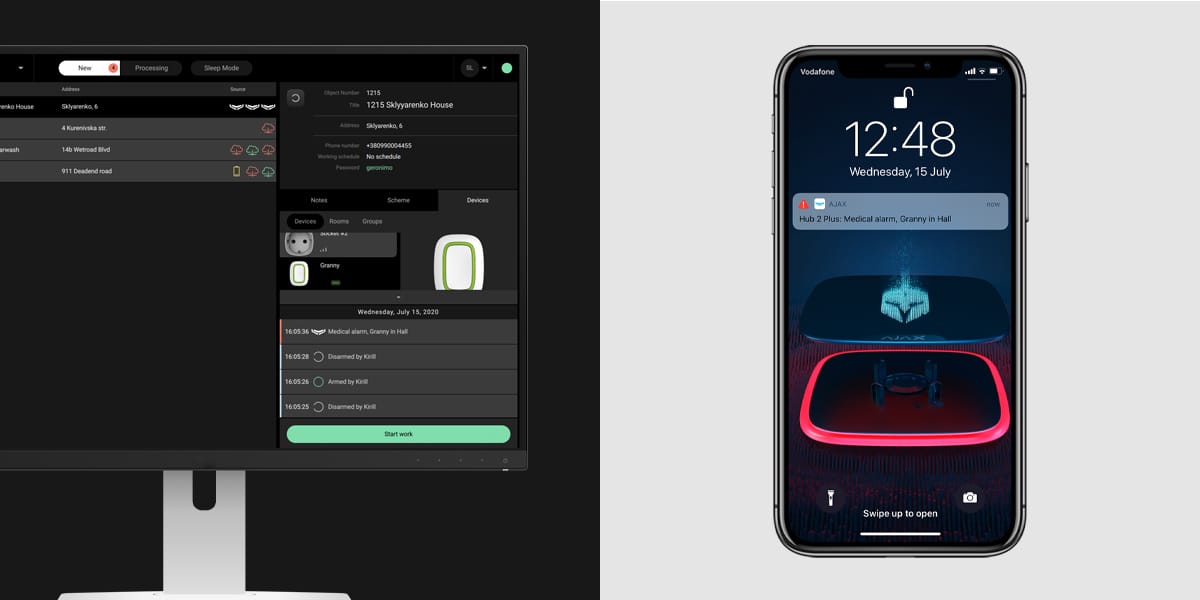 With OS Malevich 2.9 release, the settings of Button and Transmitter were expended with an option to choose a type of alarm the device communicates with an alarm monitoring company and other users:

Information in alarm notifications defines how an alarm monitoring company and users will respond to the situation. That’s why it has to correspond to the nature of the threat accurately. For instance, a wired gas detector connected to Ajax via Transmitter should notify about a gas alert. And Button provided to an older person should notify about a medical emergency.

By choosing an appropriate alarm type, engineers and user-admins change both the text of an alarm notification and a code of the event sent to the CMS.

A panic button is a tool we hardly ever use. But in case of an emergency, it can save our lives. Button, SpaceControl, or the panic button in the Ajax app notifies CMS operators that you’re in danger and are located on protected premises. An alarm monitoring company will respond immediately.

With the release of OS Malevich 2.9, pressing the in-app panic button transmits not only the alarm event to the security company but also the coordinates of the smartphone. Coordinates receiving are implemented in PRO Desktop, as well as by SIA (DC-09), Manitou, SBN protocols. And system users can copy the coordinates from the hub event feed to search directions. Thanks to these innovations, the Ajax in-app panic button can be used not only within the protected area but whenever you need help.

The second layer of protection from accidental pressing in SpaceControl

SpaceControl key fob has to be within reach: in a pocket, in a bag, on a keychain — the places where its buttons can be easily pressed by accident. So we’ve equipped SpaceControl with firm buttons and developed a filter that ignores any pressing shorter than 0.15 seconds.

With OS Malevich 2.9 release, SpaceControl (firmware 5.54.1.0 or higher) gets additional protection from accidental pressing, which has already proved its efficiency in Button. Now, double-click and long-press activation options are available in the device settings in the Ajax app. We recommend turning on this feature to avoid situations when premises are accidentally armed, or the panic button is unintentionally pressed.

👉 Read more about accidental pressing protection in the SpaceControl manual