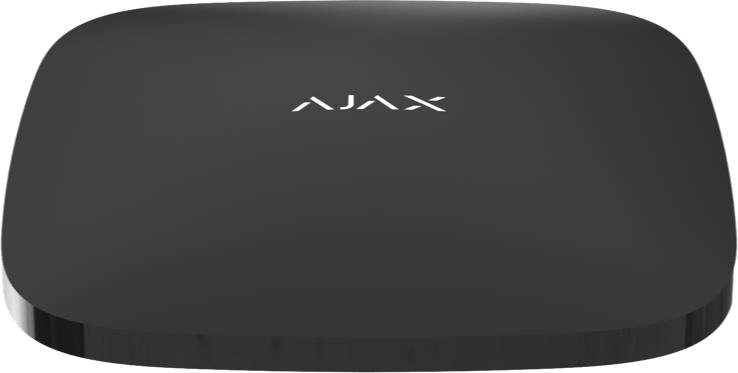 Detectors identify threats immediately: door opening, window breaking, and the presence of trespassers on the premises. Use MotionCam detectors to see the reason of a motion alarm. 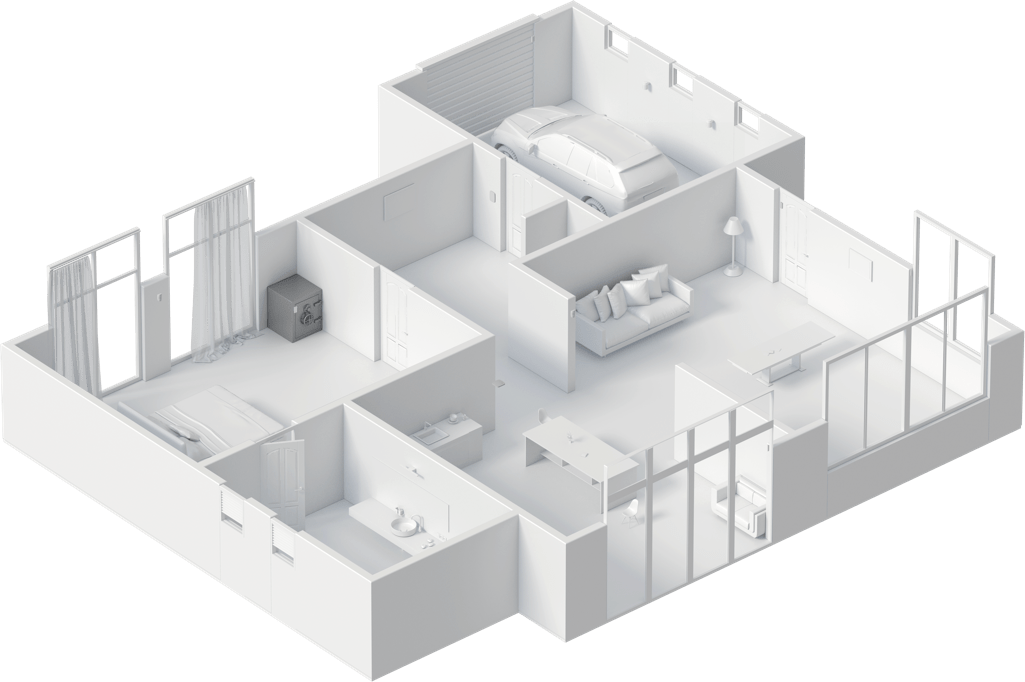 Outdoor detectors identify trespassing from the first step on your territory. Even if anyone climbs over a fence or tries to peek in a window, Ajax detectors raise the alarm instantly. 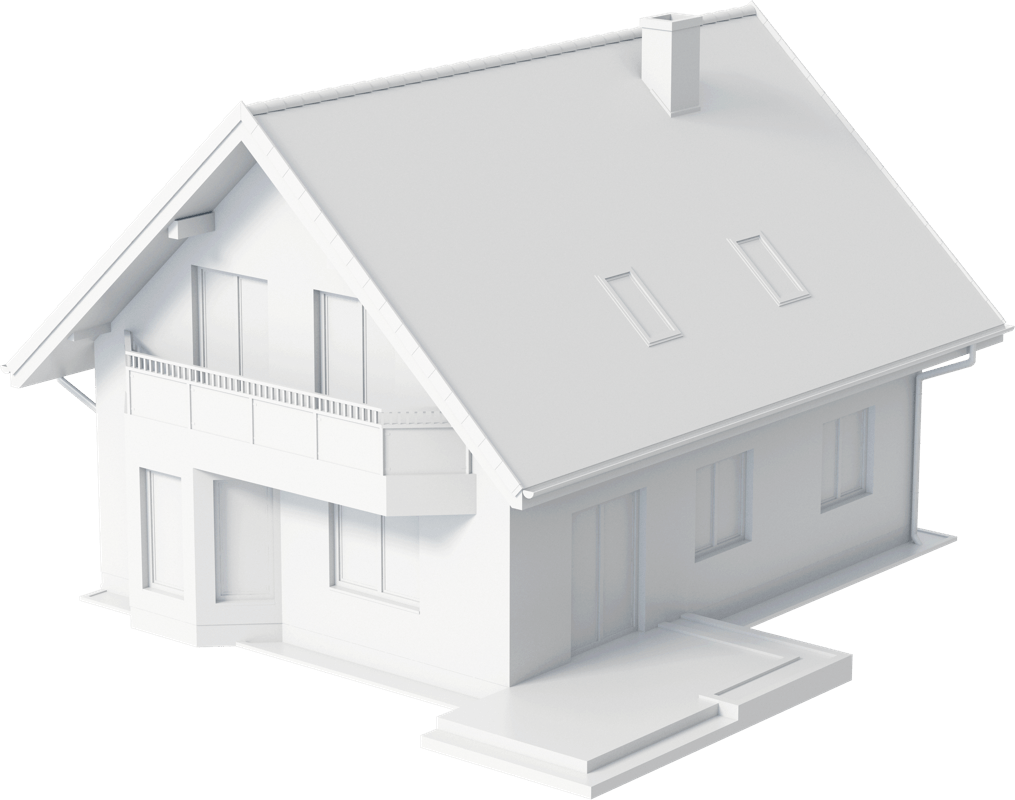 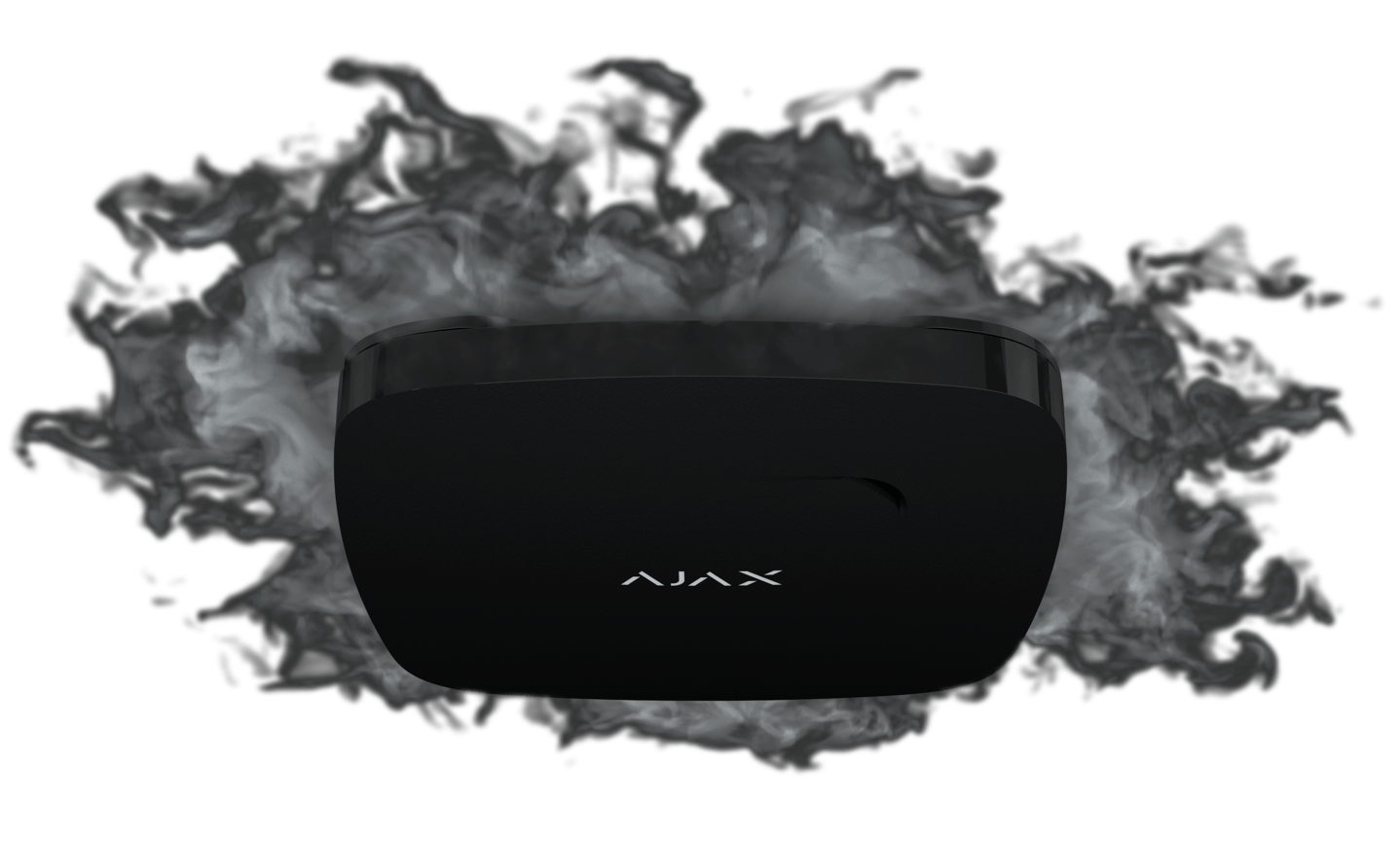 Fire detectors protect you and your belongings from fire by promptly reacting to smoke or sharp temperature rise. Moreover, FireProtect Plus can prevent carbon monoxide poisoning. The Ajax fire detectors can operate independently from the security system.

The flood detector identifies the pipe breakage, washing machine, or dishwasher leaks. LeaksProtect raises the alarm with the first flood signs and notifies you when the water dries up. 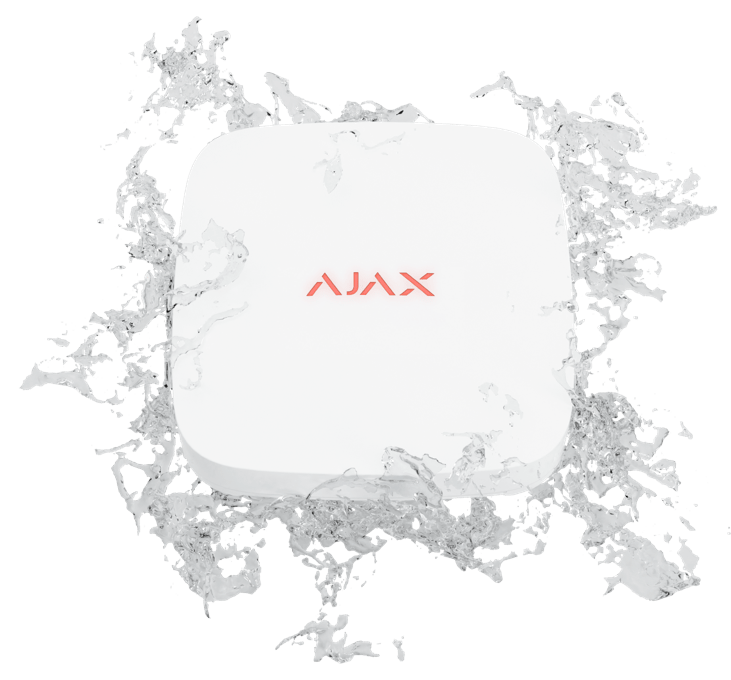 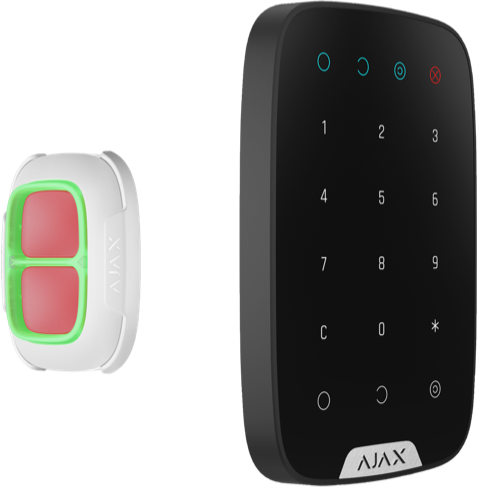 Arm the premises, open gates, and turn the lights off with one tap. And if you are threatened, use the panic button to call for help and notify your family about the danger.

Sirens scare-off intruders with a loud alarm and attract the attention of neighbors. 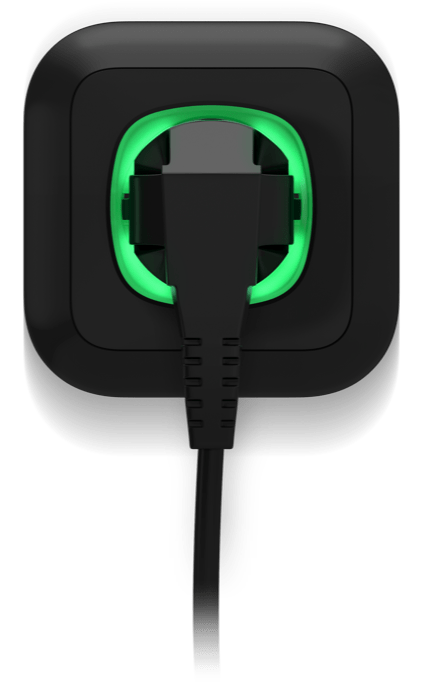 Smart sockets and relays allow you to control and automate electric locks, gates, boilers, and other appliances using the Ajax apps. Use scenarios to set up automation workflows on schedule or in response to detector alarms and changes of the system modes. 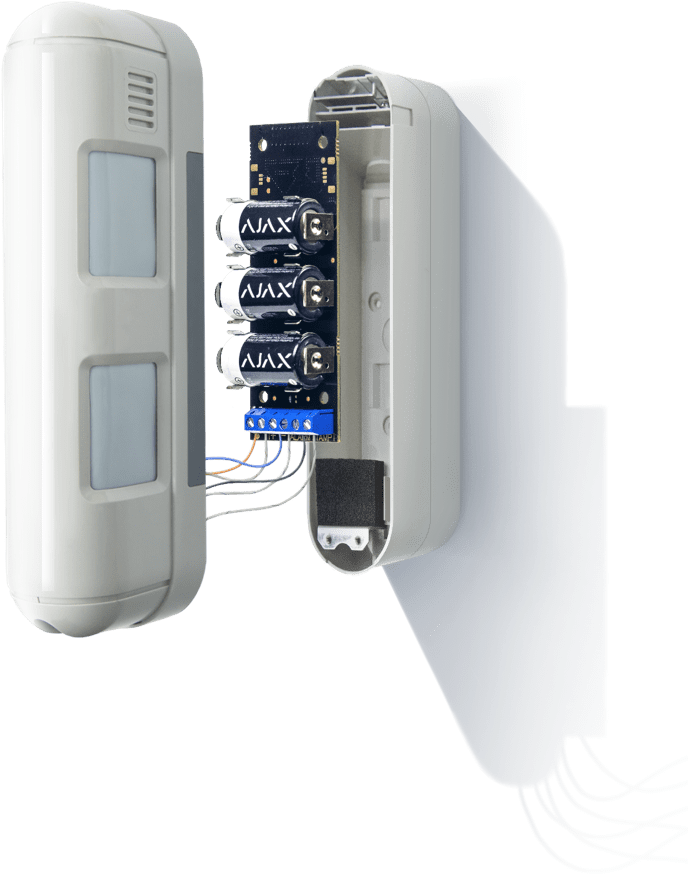 Allow connecting third-party detectors to Ajax. Integrate Ajax devices into other systems. Create an additional communication channel with the CMS. 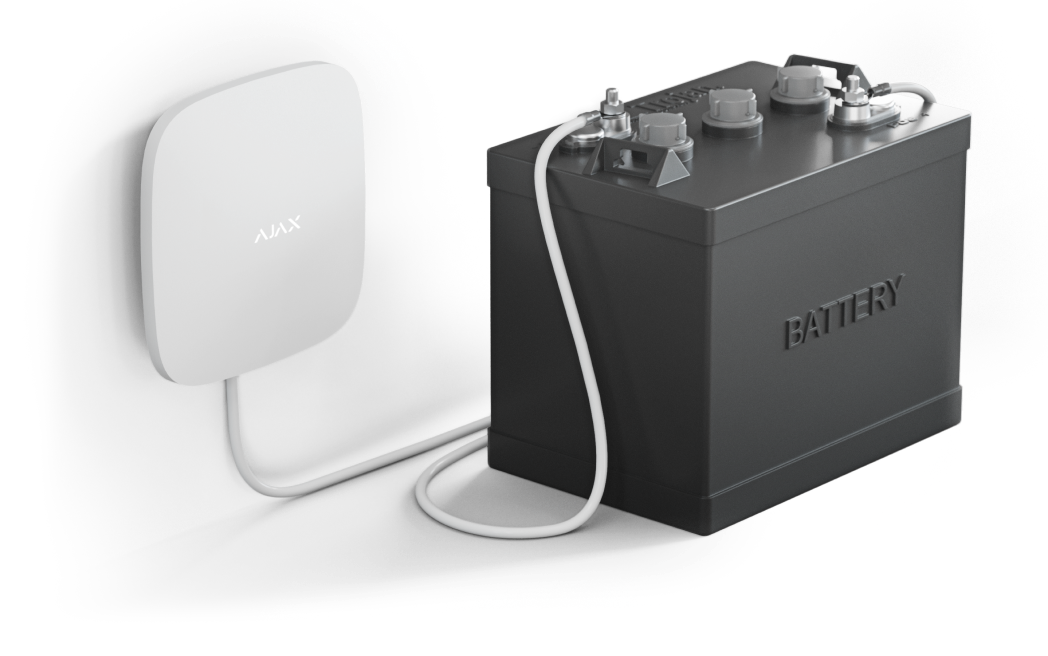 for Hub 2
Where to buy

A wireless security system is a set of security devices that all connect and interact without the need for wires (or with a minimum of them). Radio signals are used to transmit information within the system.

The advantages of a wireless security system are simple installation even in a completed interior and mobility. When moving, such a security system can be disassembled and reassembled in a new place. A wireless alarm system can also protect not only any type of stationary premises, but also movable property: yachts, motor homes, etc.

Due to the fact that the wireless alarm system has additional sensors, its functional range is expanding. The integrated security system is responsible for:

Each wireless system has a wide range of additional features. These features of the wireless security system include:

Features of a complete set of wireless security systems

Depending on what task the alarm installation solves, its equipment will be determined. The optimal set of an integrated wireless security system consists of the following devices:

Some wireless security systems are equipped with a standard camera to fully monitor the situation at the protected facility. The Ajax security system also allows you to connect third-party video surveillance systems.

Alarm sensors transmit alarm signals to the central unit at a sufficiently high speed, and it, in turn, instantly notifies users of the security system about the incident.

Wireless alarm system from Ajax differs from other manufacturers in the principle of operation of the system and important details, which together provide high-quality security of the facility:

For data transmission, Ajax wireless signaling uses its own secure radio protocols Jeweler and Wings. The first one is for communication of sensors and elements of the security system with the control panel, and the second one is for supporting the sending of photo-verification of alarms. The range of the devices thanks to the protocols is up to 2000 m in the absence of obstacles.

Ajax wireless security system devices are able to operate on one pre-installed battery without replacement from 4 to 7 years. Two-way communication allows you to track the status of system elements (charge level, etc.) in a mobile application. The user will be informed about the need to replace the battery, as well as about the loss of communication with the interrogated element of the system.

Ajax wireless burglar alarm belongs to the class of closed systems and uses proprietary software. Therefore, the appearance of viruses in the security system is completely excluded.

Some consumers do not trust wireless security systems due to the myth that it is very easy to jam the radio channel with special equipment. And without radio communication, the alarm system is deprived of the ability to resist intruders. But thanks to modern technology, wireless-type security systems can respond to jamming in the following ways:

The control panel of the Ajax security system is responsible both for managing the entire system and for communicating the system with the cloud, the user and the security company (to which systems can be connected if desired). Each such control panel, depending on the model, is equipped with at least two communication channels, for example, Hub 2 Plus is equipped with four communication channels (Ethernet, Wi-Fi, two SIM card slots) and works with LTE. This principle of operation allows you to connect the device to two different Internet providers via Ethernet and Wi-Fi, and to two cellular networks. This means that when one of the communication channels is jammed, the system switches to backup channels, after which it informs users and the security company about the jamming attempt. Automatic switching between channels takes seconds.

One of the important criteria for choosing a security system is the appearance of devices. The advantage will be in the system that will not stand out in the interior and attract a lot of attention. Ajax belongs to such systems due to its laconic design and the ability to choose colors (black or white) in most devices.

Ajax wireless motion detectors can be used even in rooms with pets. The devices do not respond to pets weighing up to 20 kg and up to 50 cm high. Sensors with alarm photo verification will also allow you to assess the situation at the facility when triggered, and understand the cause of the alarm.

Wireless solutions are easy to install and configure, high-tech, reliable. Ajax-based security systems resist signal jamming and provide a protected facility with a high level of protection, which is not inferior in reliability to wired counterparts. Such a security system is able to protect the premises not only from intruders, but will also become a reliable basis for an integrated security and automation system.

Wireless security systems have already proven to be reliable and easy to use. Ajax is one such system. Considering the security of devices, convenience, style, the ability to expand the system for various types of objects, and many other advantages, they have earned the trust of users around the world.